Gambling is a growing national public health problem. In fact, the rate of pathological gambling among American adults has doubled since 1995, with gambling addiction affecting up to 11% of the population. This sudden spike in gambling addiction has led many to question whether a gambling problem could be hereditary.

Considering how genetics can make some individuals predisposed to developing an addiction, it makes sense to question whether compulsive gambling could be hereditary. With recent medical research looking more into the genetic influence on addiction, one study analyzes how specific genes can affect how likely an individual is to develop a gambling disorder.

The study looked at pathological gambling as an impulse control disorder, qualifying problematic gambling behavior as a model behavioral addiction. While previous research and twin studies have revealed a genetic connection to developing a gambling problem, this study dug deeper into the specific genes that may influence pathological gambling.

By looking into the molecular genetics of gambling addiction, the study identified specific forms of genes — known as allele variants — that directly correspond with the chemical messengers associated with pathological gambling. The link between these chemical messengers and pathological gambling suggests that certain people may be more genetically inclined to become addicted to gambling due to the way their brains interact with the happy hormones and positive feelings that gambling can often produce.

People who have these allele variants associated with pathological gambling can pass them down from generation to generation like any other gene. Based on this information, gambling is heredity. These findings may help explain why those who have a problem with gambling tend to have family members with a similar problem with gambling. Further research may help people overcome this genetic predisposition.

How Research Discovered a Genetic Influence on Pathological Gambling

If you want to understand how the research referenced above drew its conclusions about the genetic influence on pathological gambling, you need to know more details about the study. Here’s a breakdown of the study that includes the study’s research model, preliminary results, interpretation of the results and supporting studies.

Dopamine plays a significant role in many types of addiction. Because dopamine generates feelings of pleasure, any activity that produces more dopamine can lead to addiction. Whether the high from drugs or the excitement of a big gambling win, the rush of dopamine produced by these activities keeps people coming back for more.

In fact, scientists believe that dopamine has more to do with reinforcement — repetitive pleasurable activities — than producing pleasure directly. The dopamine signal that occurs during certain activities, such as gambling, causes changes in neural connectivity that make it easier to repeat the activity over and over again without even thinking about it. The repetition leads to the formation of habits or addiction.

Initial genetic studies found associations of compulsive gambling with an allele variant of a dopamine receptor gene, indicating genetics may strongly influence the likelihood of developing a gambling addiction. The close connection between dopamine and addiction is the driving force behind further studies analyzing the genetic impact on pathological gambling.

Investigating complex phenotypes, such as problems with gambling, requires a reliable research model that can detect moderate to minor genetic effects. A genetic association study is one of the most useful research models for accomplishing this goal because it has strong statistical power for measuring genetic effects as accurately as possible.

In this study, the allele variants tested regarded dopamine receptor genes, the serotonin transporter gene and the monoamine-oxidase A gene. These genes were selected because they play critical roles in stimulating the brain’s rewards system in response to gambling. Recognizing how these genetic variants affect neurological pathways can help show how genetic differences impact the regulation of dopamine and serotonin when gambling.

During the analysis, case and control groups were observed for any notable differences in the frequency of a given genetic variant. Any correlation between variants could indicate which genetic variants make an individual more inclined to keep betting. By scanning the genetic information of the study subjects for genetic markers, researchers identified which genetic variants were strongly associated with pathological gambling.

Knowing which variants occur most frequently within gambling addiction can help predict the presence of a gambling disorder in individuals based on their genes. A genetic association study can help people determine how at-risk they are for developing problematic gambling behaviors.

The way these allele variants correspond with the brain’s neurotransmitter systems makes certain people more predisposed to dependence on the positive feelings generated by gambling. The study found that biological factors like dopamine and serotonin dysfunctions contribute to the development of a gambling problem.

For example, a variant found in the promoter region of the serotonin transporter gene of males was strongly associated with increased promoter activity, resulting in more serotonin when gambling. This increase of serotonin may make gambling more addicting for those with the variant. Because the variant associated with increased serotonin was not found in females, males may be more generally predisposed to pathological gambling.

Further investigations found an association between severe forms of disordered gambling in males with an allele variant in the promoter region of the monoamine oxidase A gene — a key contributor to serotonin and dopamine distribution. These findings suggest an even more significant sex-related effect in the genetics of gambling. Since this gene is located on the X chromosome, which males have only one of, it makes men more genetically vulnerable to gambling problems. 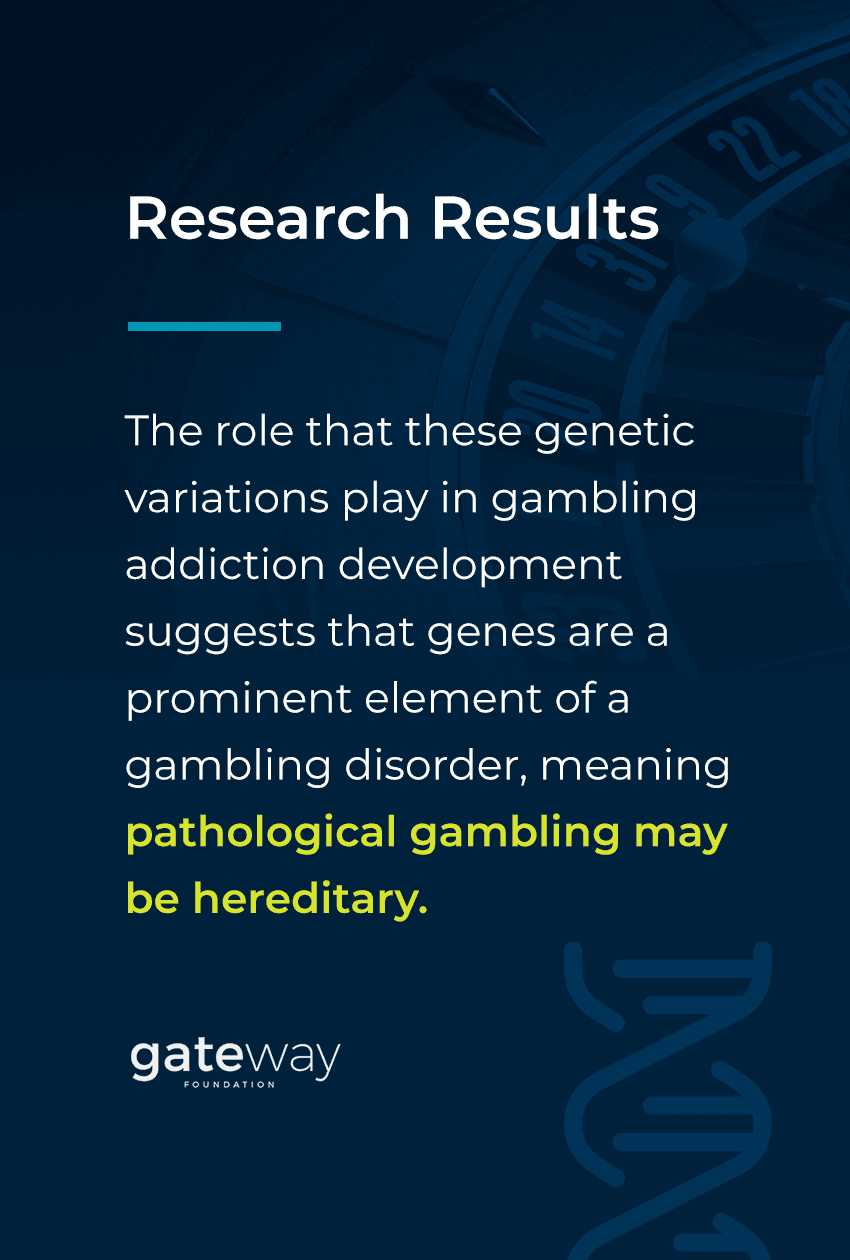 Because genes are passed down from our parents, if one of your parents is addicted to gambling, their chances are higher that you will be more susceptible to developing a gambling addiction. As a result, it is possible to inherit problems with gambling. However, being aware of this predisposition can help individuals keep their gambling habits in check and under control.

Also, it is essential to keep in mind that additional studies are needed to replicate these results and expand on their findings. Further studies will help better understand how specific allele variants lead to different biological and behavioral functioning regarding gambling addiction.

Multiple other studies support the conclusion that pathological gambling is heredity in part. Specifically, twin studies have revealed the genetic influences on gambling behavior. In these studies, sets of identical and non-identical twins are studied to determine how large of a role genetic makeup plays in gambling habits.

The results showed that identical twins who were avid gamblers were more likely to have a twin who was also an avid gambler than non-identical twins were. The researchers concluded that this association indicated gambling disorders might have more to do with a genetic link than environmental factors.

These results indicate the odds are about eight times higher for pathological gambling to occur in gambling families than control families. While these supporting studies discovered a familial connection within pathological gambling, the genetic association study was able to determine which specific genetic variants may affect gambling behavior.

Other Factors That Can Affect Your Predisposition to Gambling Addiction

Like most psychiatric disorders, behavioral addictions like pathological gambling result from a complex mixture of biological and environmental factors. Below, you’ll discover which factors, aside from genetics, can influence the likelihood of developing a gambling problem.

The inner circle is one of the biggest environmental influences in anyone’s life. Living in an environment where gambling is widely accepted and regularly practiced can significantly increase the chances of someone become a compulsive gambler. The people around you influence your behaviors and choices. As a result, it is crucial to be selective when choosing your closest friends.

Choosing the wrong inner circle may result in intense peer pressure to gamble, viewing gambling as a way to gain approval from others or a welcome distraction from loneliness. Someone who surrounds themselves with people who constantly gamble is more likely to partake in the activity as a sense of fellowship.

For example, gambling may be used as a means to relieve stress or pain inflicted by those within your inner circle. Fights with friends or a loss of a friend may lead to turning to gambling to release the cope with the situation.

The Availability of Gambling

These days, gambling is more accessible than ever, thanks to technological advancements. With everything from online casinos to mobile sports betting apps, gambling is at your fingertips. Day and night, almost anyone can find games available to play at all stakes. This 24/7 easy access to gambling can pose inherent risks to those prone to pathological gambling.

Within no time, someone with a gambling disorder can begin making wagers online at a far faster rate than they could at a brick-and-mortar gambling establishment. When someone can make a quick wager, they can get reckless and make more wagers than they would in person.

Being able to place bets faster also means compulsive gamblers can rack up losses faster. Some gamblers may even feel gone from reality in the virtual realm and potentially wager far more significant amounts than they usually would.

Research finds that compulsive gambling is a far more common behavioral issue for people younger than 65. As people get older, their desire to gamble generally declines, perhaps because older adults no longer feel the need to experiment with risk-taking or submit to peer pressure. Older adults also tend to be more grounded in their self-identity and crave a more stable lifestyle.

On the other hand, young people can tend to feel more invincible and enjoy the rush of taking risks. The thrill of chasing a big win could make those aged 24-65 more prone to developing a gambling addiction.

In general, men are more likely to struggle with pathological gambling. One study discovered that men tend to take more risks and have less compulsive coping skills than women. The study also found that men are often more socially anxious than women, and socially anxious individuals tend to have more problems with gambling.

Research also suggests that men may be more inclined to gamble because of their genetics. In fact, one twin study found that genetic influence ranked at about 47% magnitude for male gambling, but only around 28% for female gambling. However, further studies are needed to assess the difference between gambling behavior in men and women.

Pathological gambling is more common among people who have a co-occurring mental health diagnosis or a substance use disorder. The co-occurring mental health diagnosis could include depression, anxiety, bipolar disorder or post-traumatic stress disorder (PTSD). In addition, impulse control disorders like attention deficit hyperactivity disorder (ADHD) can put someone at a greater risk of developing a gambling problem.

Co-occurring illnesses also link to the hereditary quality of problem gambling because children of pathological gamblers often experience greater disruption of psychological development than other children, which further threatens their mental health. For this reason, pathological gambling is also tied to significant personal or familial distress.

Contact Gateway Foundation for Help With Managing a Gambling Addiction

To learn more about your gambling addiction treatment options, get in touch with Gateway Foundation today.

How Gambling Affects Your Brain

Benefits of Detoxing From Alcohol