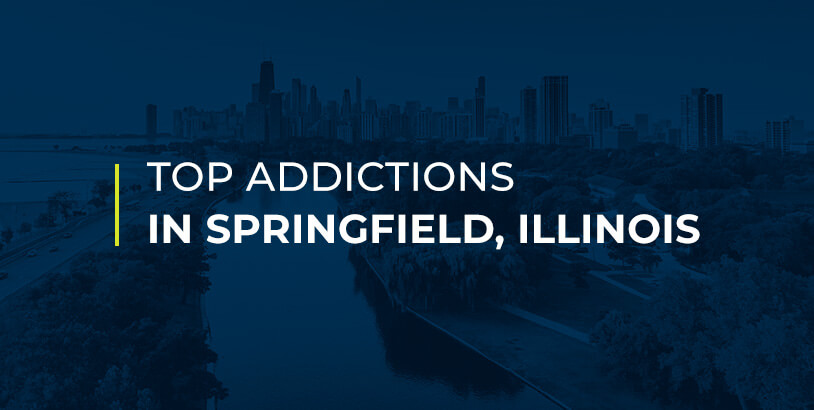 Springfield, Illinois, is a great place to live, but even people living in a wonderful city can struggle with addiction. Some of the top Springfield addictions include alcohol, drugs and even activities such as gambling and shopping. No matter how severely an individual struggles with addiction, there is hope in overcoming it through therapy and support.

Fewer than 500 people in Illinois died from opioid overdoses in 1999, but this number increased to over 2,700 in 2017, causing the life expectancy for Americans to decrease. In 2018, approximately 80% of drug overdose deaths in Illinois involved opioids. This is equal to a total of 2,169 deaths. Of these deaths, 1,568 involved fentanyl or other synthetic opioids. In the same year, health care providers in Illinois wrote 45.2 prescriptions for opioids per every 100 patients.

Opioids can include prescription medication such as morphine, codeine and hydrocodone, but they can also include illegal drugs such as heroin. In 2012, heroin was the major opiate that people used in Chicago. In 2016, the Illinois Criminal Justice Information Authority conducted a survey involving police chiefs and sheriffs, and over 50% of the respondents claimed that heroin was the largest drug threat in Illinois.

Sheriffs in the Springfield area have also noticed a change in how people are obtaining methamphetamines. In the past, most people had to make it themselves and therefore didn’t have as much access to it. Recently, however, more and more people are buying it as it has become cheaper. Crystalized meth comes into Springfield, and it is often laced with other drugs that can cause even more addiction.

Methamphetamine use can cause severe psychological effects such as psychosis, paranoia and disconnection from reality. People who use methamphetamine might also experience feeling like someone is following them or that others are out to get them.

Alcohol use disorder impacts approximately 17 million people in the United States, and approximately 40% of deaths caused by accidental injuries in Illinois involve alcohol use. In a survey of Illinois residents in 2019, 21.6% of respondents reported binge drinking or heavy drinking. That’s higher than the U.S. average of 18.6%.

People who binge drink or use alcohol to cope with emotional issues can develop a mental and physical dependence on it. Symptoms of an alcohol use disorder include:

Common forms of gambling include casino gambling, horse racing, national lotteries and scratch cards, raffles, bingo, football pools and pub fruit machines. Gambling has become more accessible than before due to the convenience of online gambling and the legalization of sports betting. Websites make it easy for people to place wagers at any time of the day. Gambling is becoming more common, and some humanitarian and social programs use it as a source of income.

Approximately 18,000 people in Illinois die each year from conditions that involve tobacco use. This is equal to about 17% of total annual deaths in Illinois. Tobacco use can include cigarettes, cigars, smokeless tobacco, vapes and e-cigarettes. It can cause serious health complications such as lung cancer.

In a 2019 Sangamon County citizen survey, 45% of residents in Sangamon County reported that they felt recreational marijuana would be positive for the area. Many people think that marijuana is not an addictive substance, but people can develop a dependence on it and become addicted to it. Approximately 9% of people who use marijuana will develop an addiction to it, and this percentage increases to 17% for those who begin using as teens.

The amount of tetrahydrocannabinol (THC), the psychoactive compound in marijuana, has increased. This makes marijuana more potent. The increased potency of marijuana also increases the risk of addiction. The more THC a person consumes, the higher effect it has on their brain, and the more it affects their brain, the more likely they are to develop an addiction to it.

The negative effects of marijuana include:

Someone using or addicted to marijuana may also experience guilt for using marijuana or find it difficult to feel satisfied from anything other than marijuana.

In 2016, cocaine and crack cocaine were considered among the most problematic by Illinois drug task forces. In the same year, an average of 203,000 individuals aged 18 and older had used cocaine within the year in Illinois.

Cocaine is a highly addictive stimulant drug. It releases the neurotransmitters serotonin, dopamine and norepinephrine in the brain to produce a heightened rush of pleasure. These neurotransmitters affect decision-making, memory and pleasure, which causes the brain to become dependent on the substance. It takes over the ways that the brain normally operates and causes intense cravings. The risk of addiction increases the longer a person uses cocaine. 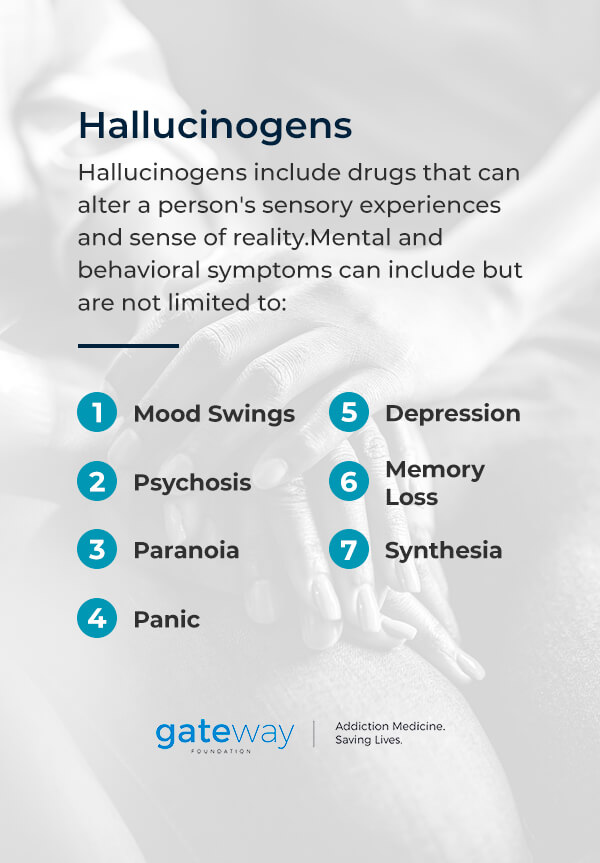 Hallucinogens include drugs that can alter a person’s sensory experiences and sense of reality. These include deliriants, psychedelics and dissociative drugs. People who use hallucinogens can develop a psychological reliance on them over time. People who struggle with an addiction to hallucinogens will experience different mental, physical and behavioral symptoms depending on the type of drug they use.

People under the influence of hallucinogens may also behave erratically or find it difficult to maintain conversations.

Both younger and older generations can struggle with a gaming disorder. It is not officially considered an addiction, but Internet Gaming Disorder is considered to be a legitimate diagnosis in the Diagnostic and Statistical Manual of Mental Disorders (DSM-5). It can cause issues in psychological and family functioning.

When someone struggles with a gaming addiction, they may have an obsession or preoccupation with video or internet games, and they may struggle with withdrawal symptoms when they are not playing games. They may also lose interest in other hobbies and activities and continue to overuse games even while aware of the impact on their life.

Someone who struggles with sex addiction may have obsessive and chronic sexual fantasies or thoughts. They may engage in sexual relations with multiple partners and lie to cover behaviors. Sex addiction can interfere with work performance, productivity and other aspects of daily life.

Food addiction causes a person’s eating habits to amplify the reward system in their brain and overthrow the body’s ability to signal when it’s time to stop eating. People who struggle with a food addiction will usually indulge in excess amounts of foods that are high in sugar and fat, but food addiction is not recognized as an eating disorder.

Approximately 5% of people in the U.S. struggle with food addiction. Some of the things that can contribute to a food addiction are advertisements for fast food and unrealistic ideas about body image that are shown in the media.

What to Do if You Are Struggling With Addiction in Springfield, Illinois

Struggling with addiction can feel scary, but there is hope. Addiction does not have to rule your life, and you can find freedom from it. There are many ways to overcome addiction, and the important steps to take include the following:

1. Admit That You Are Struggling With Addiction

The first step toward recovery is to recognize that you have an addiction, deciding to make changes in your life. When you make the brave decision to overcome addiction, you have to make an effort to change the ways you cope with stress, activities you do in your free time, the people you allow into your life, how you perceive yourself and the medications you take.

When you recognize that you have an addiction and decide to make changes, it’s important to ask for help. Talking to a loved one or other individual you trust can provide you with the support you need to make changes and seek treatment.

Mental health disorders often accompany addiction. These can include anxiety, depression and post-traumatic stress disorder. It’s important to address and treat these conditions along with treating your addiction.

Depending on the type of addiction you struggle with, there are many different treatment options. The safest and most effective way to treat addiction is in a safe and supportive treatment center. Addiction treatment centers can support you mentally, physically and emotionally.

Detoxification is the process in which you clear your body of the substance or substances you are addicted to. It’s best to undergo this process in a treatment center because detoxing at home can be dangerous. In some cases, medical professionals can administer medications to help ease the symptoms of withdrawal during the detox process.

A treatment program can offer services such as cognitive behavioral therapy, coping skills therapy, 12 step support, relapse prevention, trauma therapy, group therapy and more. The type of treatment that will benefit you the most depends on the addiction you struggle with as well as your individual needs. People struggling with addiction can seek various types of treatment programs, including residential treatment, outpatient treatment and day treatment with partial hospitalization.

Residential treatment provides intensive treatment to patients inside of a treatment facility. Residential treatment can last a few days or several months, depending on the severity of the addiction. Outpatient treatment allows patients to schedule their treatments around work or school and attend treatment when it is convenient for them. Day treatment with partial hospitalization is for individuals who wish to remain at home but also require medical monitoring.

At Gateway, we are with you for life. We support you mentally, physically and emotionally as you work toward breaking free of your struggle with addiction. Contact Gateway Foundation to learn more about how we can help you overcome addiction. We will provide a safe and supportive environment for you to begin your healing journey, and we will build a treatment plan that is right for you.