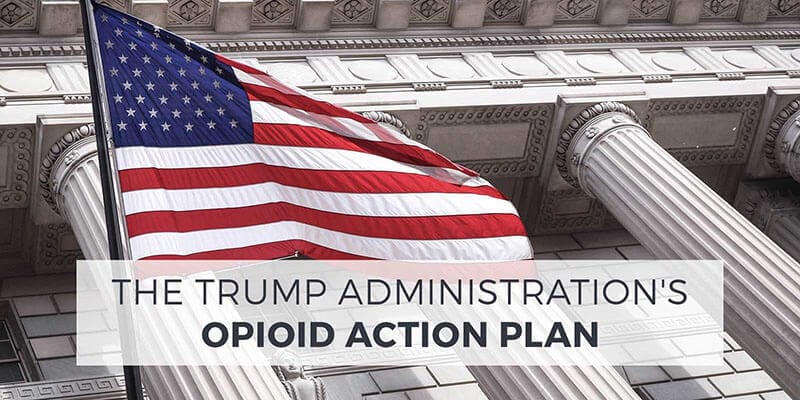 During the 2016 presidential election, then Republican nominee Donald Trump took a tough stance on the opioid crisis, declaring he would help solve the crisis if he were elected with is Trump Administration Opioid Action Plan. President Trump often cited his personal connection to addiction as a major motivator, as his oldest brother passed away after a battle with alcohol use disorder.

The first step the Trump administration took was to declare the opioid crisis a national public health emergency last October. In 2017, Trump also donated his third quarter salary to the Department of Health and Human Services in an effort to combat the opioid crisis.

During a speech on Monday in New Hampshire, President Trump released his Trump Administration Opioid Action Plan, which he called “The Crisis Next Door.” The plan is broken into the following three sections: enforcement and interdiction, education and prevention through a federal advertising campaign, and employment assistance for those battling addiction:

The DOJ is now leading a task force on major litigation against drug companies at the federal level. Trump called for these companies to be held responsible for their actions. The administration plans to cut the nationwide opioid prescriptions by one-third. Trump also stated federal funding will be invested in the development of non-addictive painkillers. In addition, within two years at least half of all federally employed healthcare providers will adopt best practices for opioid prescribing, and within five years all federally employed healthcare providers will do so in order to prevent over prescribing.

Trump also emphasized supplying emergency responders and law enforcement with the overdose-reversing medication Narcan. Some cities, including Chicago, have already put forth this policy.

A major initiative will be a federal advertising campaign targeting young adults and children. The administration plans to spend money on commercials that depict the devastating effects of drugs to scare children away from ever using them.

Another focal point is helping inmates with substance use disorders get the treatment they need and, further, helping them secure employment after they are released. Trump referenced the country’s low unemployment rate and strong economy as being beneficial to helping inmates get hired.

Although no financial plans were discussed during the speech, in his latest budget proposal released in February, Trump called for an allocation of nearly $17 billion in 2019 to fight the opioid epidemic. The money from the budget will mainly go to expanding coverage of Medication Assisted Treatment (MAT) and helping states monitor and track clinics that prescribe a large amount of opioids, which many public health officials deem necessary to resolving the crisis. Trump reiterated in his speech that the administration will dedicate resources to ensure the accessibility and affordability of medication-assisted treatments.

The administration will also waive a Medicaid rule that prevents treatment facilities with more than 16 beds from receiving reimbursements for addiction services. This initiative could prove instrumental for low-income individuals seeking treatment.

Shortly after the president’s speech, Congress released plans to introduce multiple bills to help end the opioid crisis. One of the bills is the Preventing Overdoses While in Emergency Rooms (POWER) act. This bipartisan bill aims to set up protocols for emergency rooms across the United States on best practices for discharging overdose patients, to ensure patients have the resources they need to succeed post-hospitalization. Measures of this act would ensure patients’ access to overdose-reversal medication and other medication-assisted treatments, as well as peer-support specialists and other types of treatment programs.

To learn more about the Trump Administration Opioid Action Plan or to get help with addiction, give Gateway a call at 877.505.4673.