Addiction is a chronic brain disorder, but it is treatable. Some of the most common addictions in the Independence Boulevard area of Chicago include drugs, alcohol, tobacco and food. No matter what type of addiction a person struggles with, it is possible to seek treatment and work toward overcoming the hold that addiction can have.

Most Commonly Abused Drugs and Addictions in Chicago

Common addictions in the Chicago Independence Boulevard area include cocaine, marijuana, opioids, benzodiazepines, methamphetamine, MDMA, alcohol, tobacco and food. Some of these substances are prescribed by doctors, some are obtained illegally and some are legal and easily obtainable without a prescription. All of these substances can become addictive.

Cocaine is a highly addictive stimulant drug that creates a rush of pleasure in the brain by releasing neurotransmitters such as serotonin, dopamine and norepinephrine. These neurotransmitters affect pleasure, memory and decision-making, which causes the brain to develop cocaine dependence. Essentially, cocaine overtakes the brain’s regular way of functioning and creates intense cravings and physical dependence.

The risk of developing an addiction to cocaine increases the longer a person uses it, and it is difficult to quit. Cocaine use can cause high blood pressure, nausea, headaches, confusion, sweating, chills, depression, trouble sleeping, seizures and coma. Long-term cocaine use can negatively affect the lungs, brain, kidneys, heart and gastrointestinal system.

There is a common misconception that marijuana is not addictive. While this may be true for some people, it is untrue for others. If someone uses marijuana and feels that they need it to get through the day or deal with daily situations, they may be addicted.

Marijuana is legal for recreational use, medicinal use or both, depending on the state. In some states, all forms of marijuana are illegal. On January 1, 2020, Illinois made it legal for anyone over 21 to purchase, possess and consume cannabis. While there are still restrictions on the amount of marijuana an individual can possess, this new law makes it easier for people to use marijuana and potentially become addicted.

Most of the problems with marijuana use arise when users smoke it. Smoking marijuana can cause heavy coughing, a stinging or burning sensation in the mouth or throat and high phlegm production. People who smoke marijuana also have an increased risk of developing acute chest illnesses, lung infections and lung cancer.

The amount of THC in marijuana has increased rapidly, making it more potent. Higher potency increases the risk of addiction. The higher the THC concentration in the marijuana a person consumes, the quicker they become dependent on it.

In 2013, Heroin was reported as the major opiate in Chicago. Heroin ranked as the main reason people living in Chicago entered drug treatment. The Drug Enforcement Administration (DEA) published an intelligence report in 2019 that reported opioids as the greatest drug threat in the Chicago area. It listed fentanyl and heroin specifically.

Opioids can cause problems for more than just adults. Infants born to women who use opiates are at risk for neonatal opioid withdrawal syndrome (NOWS). Infants with NOWS will be dependent on opioids when they are born and experience withdrawal symptoms.

Benzodiazepines can treat insomnia, seizures, anxiety, panic disorders, alcohol withdrawal, muscle spasms and other conditions when a doctor prescribes them. If people take them without a doctor’s recommendation, they can become addictive. There are two types of benzodiazepines. Hypnotics can treat sleep problems, and they are usually short-acting. Anxiolytics are usually used to treat anxiety, and they are longer-lasting. Common benzodiazepines include Temazepam, Clonazepam, Lorazepam and Alprazolam.

Benzodiazepines can cause a sense of euphoria because of how they interact with the brain. Some people misuse benzodiazepines for recreational use or to increase their effects. These drugs normally come in pill form, but some people snort the powder of crushed tablets or inject a mixture of water and crushed tablets to produce a more intense and faster high.

Using benzodiazepines can produce drowsiness, insomnia, memory issues and difficulty with balance and coordination. When someone goes through withdrawal from benzodiazepines, they can experience symptoms that include restlessness, irritability, weakness, muscle tension, aches, pains, hallucinations, seizures and blurred vision.

Methamphetamine is a substance that can be injected, swallowed, snorted or smoked. Symptoms of methamphetamine use and withdrawal include anxiety, depression, psychosis, weight loss, tooth decay, the transmission of bloodborne viruses, increased risk of suicide and increased demand on the cardiovascular system.

3,4-methylenedioxymethamphetamine (MDMA) is also known as ecstasy, and it is one of the most popular party drugs in the world. When people use it, it affects their sensory experiences and energy, leading to reckless behavior and dangerous health risks. People can become addicted to it when they use it regularly.

MDMA is a synthetic drug that enhances the senses of touch, sight and sound, and it can heighten feelings of happiness and friendliness. It can cause side effects such as increased body temperature, jaw clenching, muscle and joint stiffness, issues with attention and memory, confusion, anxiety, panic attacks and paranoia. An MDMA overdose can result in high blood pressure, faintness, panic attacks, loss of consciousness and seizures. Extended use of the drug can also cause damage in different areas of the brain.

The Illinois Department of Human Services (IDHS) reports approximately 9,000 to 10,000 deaths from accidental injuries each year, and 40% of these deaths directly or indirectly involve alcohol or drug use. Alcohol misuse is common and can lead to addiction faster than most people think. Alcohol misuse can lead to high blood pressure, irregular heartbeat, memory loss, liver damage, learning difficulties, alcoholic hepatitis, various types of cancer and stroke.

Drinking alcohol is a common activity in Chicago. From bars to sporting events, alcohol is involved in many social situations, which means that alcohol misuse is also common. People have an increased risk of developing an alcohol use disorder if they start drinking at an early age, have mental health conditions, have a history of trauma or have a family history of alcohol misuse. How much alcohol a person drinks, as well as how fast and how often they drink it, also affects whether they develop an alcohol use disorder.

Tobacco use is the main cause of preventable death in America. Thirty-four million people in the United States smoke tobacco, and the majority of those people smoke every day. Tobacco can include cigarettes, cigars, vapes and smokeless products such as chewing tobacco. Nicotine is an addictive substance in tobacco products, and it increases the risk of stroke and heart attack. Tobacco use can also cause other health complications such as cancer, high blood pressure, tooth loss, a weakened immune system and other conditions.

Addiction is not limited to drugs, alcohol and tobacco. Even substances such as food can become addictive. Approximately 5% of the population struggles with a food addiction, mainly caused by dysfunctional eating patterns. Various factors, such as fast food advertisements and the media’s portrayal of unrealistic ideas concerning body image, can lead to dysfunctional eating patterns.

People who struggle with a food addiction often eat an excess of meals high in sugar and fat, but food addiction is not always considered an eating disorder. Using food to cope with emotional stress is known as emotional eating, and it’s a form of self-medicating that can lead to addiction. 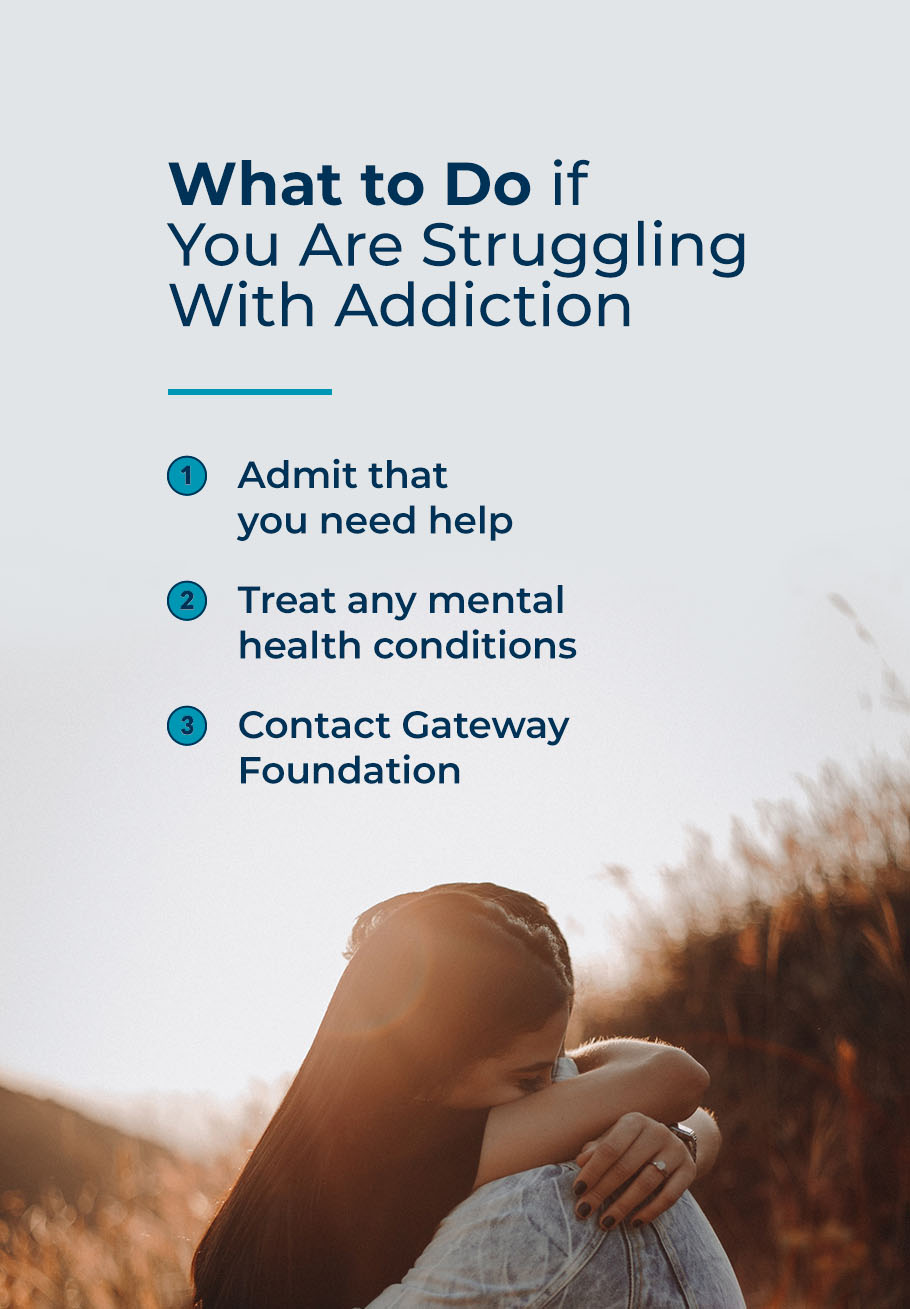 What To Do if You Are Struggling With Addiction

If you are struggling with addiction, it’s important to remember that it doesn’t have to last forever, and recovery is possible. You can overcome your addiction if you take the steps necessary to heal and recover. If you are struggling with a substance use disorder, it’s important to admit that you need help, approach any mental health conditions that you may have and seek treatment from professionals.

1. Admit That You Need Help

Seek treatment for your addiction. Contact Gateway Foundation to begin your recovery journey. Seeking treatment is the most important step toward recovery. Treatment provides you with the mental, physical and emotional support you need to overcome addiction and break free from its hold. Addiction can be scary, but there is hope, and recovery is possible.

Get Help With Your or a Loved One’s Addiction

The caring and compassionate staff at Gateway will help to create a treatment plan that works for you. Even the top addictions in the Chicago Independence Boulevard area are treatable, and there is hope for anyone struggling with addiction.

We offer various treatment programs such as cognitive behavioral therapy, 12-step facilitation and support, relapse prevention, group and individual therapy, outpatient treatment, inpatient treatment and more. At Gateway, we are with you for life. Contact us today to learn how we can help you overcome addiction and get back to living a fulfilled life. You don’t have to face this alone.