Carbondale, Illinois, is a wonderful place to live, but substance abuse can happen even in the best cities. People everywhere struggle with addiction, but there is always hope for recovery. Quality treatment centers can provide a safe place for people struggling with substance use disorders to receive addiction treatment.

Some of the top addictions in Carbondale, Illinois, include prescription medications, illegal substances, alcohol, tobacco and even habits such as gambling. Even though drug addiction and impulse control disorders can seem difficult to overcome, a quality treatment center can provide treatment options to help those struggling with addiction find success in recovery.

Opioids include prescription medications as well as illegal drugs such as heroin and the synthetic opioid fentanyl. Doctors often prescribe narcotic medications such as hydrocodone, morphine, codeine and oxycodone to help patients manage severe pain.

These medications reduce pain signals before they get to the brain. They also release chemicals in the brain that produce pleasure and a sense of calm. When a person misuses prescription opioids or takes them over a long period, they can experience withdrawal symptoms and become addicted. Most people who struggle with an opioid use disorder start using the drug because of a prescription.

Synthetic opioids such as fentanyl caused 84% of deaths involving opioids in 2020, and synthetic opioids were involved in 70% of general overdose deaths. Prescription opioids can cause side effects such as nausea, constipation, drowsiness, confusion and euphoria. It can also cause slowed breathing and hypoxia, which occurs when the brain doesn’t receive enough oxygen. This can result in brain damage, a coma or death.

When someone struggling with opioid use disorder goes through withdrawal, they may experience the following symptoms:

Treatment for opioid use disorder can include methods such as counseling, medication-assisted treatment and therapy.

When people misuse alcohol it can create significant safety and health risks. A person may have an alcohol use disorder if they do the following:

Different aspects such as psychological, environmental, social and genetic factors can affect a person’s relationship with alcohol and how their mind and body react to it. Some people are more vulnerable to alcohol use disorder than others, and alcohol can have a bigger impact on them.

Drinking excessive amounts of alcohol over time can affect areas of the brain that impact judgment, pleasure and the ability to control one’s behavior. When alcohol use starts to change certain functions in the brain, a person will crave alcohol to feel pleasure or decrease negative emotions. There are several treatment options available to help people recover from an alcohol use disorder if alcohol is negatively impacting their life.

Tobacco is present in several products such as cigarettes, vapes, cigars and smokeless tobacco. Nicotine is the addictive substance in tobacco, but it also contains other chemicals — such as arsenic — that can cause cancer. Tobacco use can also lead to tooth loss, premature skin aging, blood clots, heart attacks, seizures and other conditions.

Some people believe that using e-cigarettes is a safe alternative to cigarette smoking, but using these products presents serious health risks. E-cigarettes contain fine particles that can enter deep into the lungs when inhaled. They also contain harmful organic compounds and heavy metals such as lead, nickel and tin. In addition to these dangerous chemicals, e-cigarettes contain dangerous additives like diacetyl, a chemical that can cause the harmful lung disease known as popcorn lung.

Cocaine is a highly addictive substance that stimulates the nervous system. It creates a surge of dopamine, norepinephrine and serotonin in the brain, which creates feelings of pleasure and euphoria. When people use cocaine, they either dilute and inject the powder substance, snort it or take it in a pill form. A person may have a cocaine use disorder if they:

Cocaine affects pleasure, memory and decision-making in the brain. People develop a dependence on cocaine because long-term use changes the ways that these chemicals affect the brain. It also has adverse effects on the body, including abdominal pain, nausea, headaches, high blood pressure, constricted blood vessels, rapid heart rate, low appetite, restlessness, anxiety and irritability. Cocaine can also increase the risk of stroke and heart attack.

When a person goes through withdrawal from cocaine, they can experience the following symptoms:

There are various treatment options patients can pursue for cocaine misuse. Medication, individual therapy, group therapy and social services can help people through withdrawal and recovery.

Methamphetamine is a highly addictive stimulant drug that can be snorted, smoked, swallowed or injected. It affects the central nervous system and releases dopamine in the brain, affecting motivation, movement and reward areas. Methamphetamine use can cause the following effects:

The National Institute on Drug Abuse (NIDA) conducted a study between 2015 and 2019 and found that the number of overdose deaths in the United States that involved methamphetamine almost tripled over this time frame. Methamphetamine use also increases the risk of contracting HIV when injecting the drug or Parkinson’s disease, even if a person no longer uses the drug. Using methamphetamine over long periods can cause cognitive and emotional problems because it significantly affects areas of the brain that control memory and emotions. 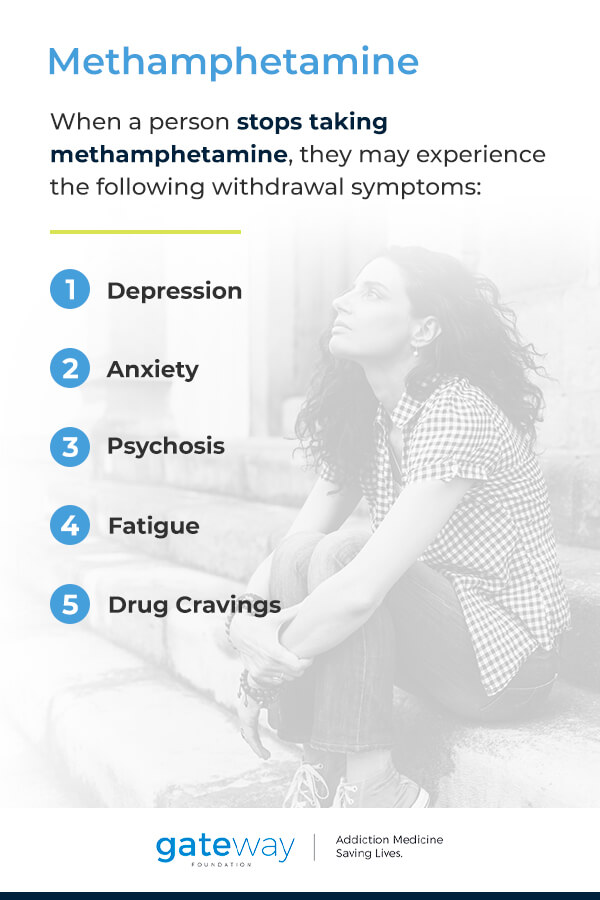 When a person stops taking methamphetamine, they may experience the following withdrawal symptoms:

Hallucinogens are drugs that significantly alter a person’s feelings, thoughts and awareness of their surroundings. When people use these drugs, they see and feel things that seem real but aren’t actually there. Dissociative drugs can cause people to feel disconnected from their environment and themselves, giving them the sensation of being out of control. Some hallucinogens are synthetic, while others come from mushrooms or plants. Common hallucinogens include LSD, peyote, psilocybin, DMT and 251-NBOMe. Phencyclidine (PCP), ketamine, salvia and dextromethorphan are common dissociative drugs.

Hallucinogens interact in the brain and spinal cord by disrupting communication between chemical systems. Along with hallucinating images, sounds and feelings, people can experience an altered sense of time, increased heart rate, nausea, spiritual experiences and heightened sensory experiences and emotions. These drugs can also cause people to experience the following short-term and long-term effects:

Hallucinogens can become addictive if a person builds a tolerance to them. This occurs when they use the drug frequently enough that they begin to need higher amounts of the drug to feel the same “high.”

Since the 1990s, the THC content in marijuana has significantly increased, causing it to be more potent. This increases the concern that marijuana use could potentially carry more consequences than in the past, but researchers do not yet know how harmful high concentrations of THC could be to the brain and body.

Approximately 2.6% of the population struggles with a gambling addiction, and it is the most common impulse control disorder in the world. It’s a habit that can negatively impact a person’s finances, work, family and social life. Similar to drug and alcohol use, gambling stimulates reward centers in the brain by releasing dopamine. This causes people to build a tolerance to gambling habits in the brain and feel that they need to bet more money and pursue more risks to feel the same pleasure.

If someone is struggling with a gambling addiction, they may show the following signs:

12-step programs and support groups such as Gamblers Anonymous can help people overcome addiction to gambling. Cognitive behavioral therapy can also be a helpful tool in overcoming a gambling addiction.

What to Do if You Are Struggling With Addiction

If you or a loved one is struggling with addiction, there is hope. It is possible to recover with hard work and a quality support system. If you notice signs that you might have a substance use or impulse control disorder, you can pursue recovery.

Acknowledge That You Need Help

The first step toward recovery is acknowledging that you have a substance use or impulse control disorder. It’s important to realize how this disorder is negatively impacting your life and that you need to make changes to get back to living a fulfilling life. To understand your addiction, it’s also important to acknowledge any mental health conditions that may have contributed to your substance use disorder or resulted from it.

Anxiety and depression are conditions that often lead to substance use or impulse control disorders, and they can also occur because of the struggles that come with addiction. If you find yourself struggling with any mental health conditions, it’s important to address these along with your substance use disorder.

Reach Out For Support

When you decide to pursue recovery, reach out for support from loved ones. Be honest with them about what you’re going through and let them know that you want to make a change. Friends, family, counselors and other support systems can be incredibly helpful resources as you work toward recovery.

It’s also important to seek counseling or therapy for any mental health conditions because your mental health will significantly impact your recovery. Managing anxiety and depression can help you address any underlying struggles that contributed to your substance use disorder. At Gateway, we provide treatment that addresses mental health so that patients can work through recovery with emotional wellbeing.

Recovery requires change. To fully recover from a substance use or impulse control disorder, you must eliminate anything that could trigger cravings or a desire to return to old habits. This can include old routines, acquaintances you used to use substances with, unhealthy hobbies and places where you used to feed your addiction.

It’s essential to change your routines to include healthy activities and people who support your recovery. Find new, healthy hobbies that you’re passionate about to distract yourself from any cravings or triggers that might occur.

If you or a loved one is struggling with addiction, there is hope. Recovery is possible with help, and at Gateway Foundation, we are dedicated to helping patients find freedom from addiction. Our caring and compassionate staff provides life-saving treatment for a wide variety of substance use disorders so that patients can get back to their families, jobs and communities.

Contact us for more information and learn about how we can help you or a loved one overcome addiction.