Though more men have died from overdoses and more men have substance use disorders, in the past few years, women have begun to close the gap. This is partly due to women being prescribed prescription opioids by their doctors. According to reports, the proportion of deaths from prescription opioids increased 400 percent among women and 265 percent among men between 1999 and 2010.

Women are equally, or in some cases, more likely to use prescriptions opioids than men. Studies have shown that physical and sexual trauma followed by post-traumatic stress disorder (PTSD) is more common in women than in men seeking treatment. According to research, women are more likely to experience and undergo sexual and physical trauma, and are, therefore, more likely to report chronic pain and be prescribed medication. Women are also more likely to be undertreated or misdiagnosed for their pain, which is why women tend to be prescribed opioids more often than men. 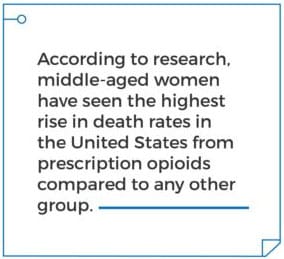 Women are also at a higher risk for a substance use disorder due to biological differences. Men and women do not process drugs in the same way, since women tend to have a higher percent of body fat and lower percent of body water. Which, according to medical studies, means smaller doses for women can be more toxic.

According to research, middle-aged women have seen the highest rise in death rates in the United States from prescription opioids compared to any other group. However, substance use disorder is still portrayed as a male issue. A study in Rhode Island found that women are three times less likely to receive Naloxone by emergency responders than men. The cause of this issue is two-fold. Prescription opioids are not as recognizable because they do not always leave clear signs of using compared to other drugs, such as heroin. Therefore, emergency responders may not be aware that an overdose occurred. In addition, substance use disorder is framed as a male issue, and therefore, the underlying problem when a woman is an emergency situation is often times not believed to be an overdose.

When seeking treatment, there are many additional challenges women must overcome. One of the biggest is the stigma that women are not supposed to have substance use disorders. In society, women are perceived as caretakers and are often shamed into silence. Women are supposed to be the ones taking care of everyone, which makes it hard for them to take care of themselves and put their health first. Pregnant women and mothers may also fear legal ramifications and losing their children. In addition to stigma, women also lack access to treatment that is suitable for them. In order for women to get the help they need, stigma must be reduced and access to treatment must be expanded.

To learn more about the gender gap of addiction or to seek help with addiction, give Gateway a call at 877.505.4673.