Addiction is a growing problem across the United States, and more people are starting to see the long-term effect of substance use disorders. But addictions don’t always involve substances. Sometimes an addiction can be to the internet, gaming, food or even sex. Often, we don’t even realize we’re struggling with addiction until it has started to affect our health and personal lives.

If you’re facing addiction, you’re not alone. Many people experience addiction at some point in their lives. The good news is that recovery is always possible. Many resources and treatment options are available, and reaching out for help is the first step.

One in 10 Americans struggles with addiction. More people understand what you’re going through than you may realize. Certain addictions are more predominant in the Swansea, Illinois, area than others, but treatment is available for various substance use disorders.

Alcohol is the most dangerous drug to exist for numerous reasons. This legal substance is glamorized in media and used recreationally in social situations, restaurants and celebrations. Alcohol has become such a normalized part of society that it’s become difficult for many people to see it as an addictive substance.

Part of what makes alcohol so dangerous is how accessible it is. In Illinois, only adults over 21 can buy and consume alcohol. However, teenagers and younger adults still manage to gain access to alcoholic beverages, with 29% of teenagers drinking across the United States. This early experimentation and other factors, such as a family history of alcoholism, contribute to developing addictions in adulthood.

Swansea doesn’t permit the purchase of alcohol between 2 a.m. and 6 a.m. regardless of the day of the week. Despite these legal restrictions, alcohol still ranks as one of the top addictive substances in the area. The dangers of alcohol aren’t discussed often, and the way it’s sensationalized makes it more tempting than substances like heroin or methamphetamine, which people are constantly warned against.

Once someone develops a dependency on alcohol, it can be challenging to stop drinking. The cravings and withdrawal symptoms keep some people from quitting the substance altogether. But with the appropriate care and a commitment to recovery, healing is possible.

Tobacco use is one of the most common addictions in the United States. Tobacco is the leading cause of preventable disease and death in the country, and 34 million adults are current cigarette smokers. It’s estimated that 74.6% of smokers use tobacco products daily.

Like alcohol, tobacco is widely available once you reach the age of 21. Despite age restrictions, 22.7% of high school students reported using tobacco products in 2019. E-cigarettes have been suggested by some to be a safe alternative to tobacco, but these products contain harmful ingredients such as nicotine and cancer-causing chemicals. Quitting tobacco and nicotine products can be challenging. Nicotine is a highly addictive substance that causes various withdrawal symptoms. These unpleasant feelings can convince someone to continue using the substance, even if they know that prolonged use can lead to long-term health effects.

The process of recovering from tobacco and nicotine can be long, but your body and brain will start functioning better without nicotine inhibiting their ability to function. Multiple types of therapy and treatment are available, so you can use the method that’s best suited to your individual needs.

Placing bets or spending money on the lottery may seem like a casual bit of fun, but it can devolve into addiction before you even realize it’s happening. In Illinois, gambling is a problem that continues to grow as legislators continue to invest in various gaming expansions.

While gambling doesn’t have the same effect on the body as a substance might, this addiction has many real-world impacts. Someone who gambles compulsively will likely continue to do so even when they don’t have the financial resources for it. The financial troubles that come with gambling addiction sometimes lead people to commit illegal acts to come up with the money to continue gambling or pay off debts.

Many ways to gamble exist today, including state and federal lotteries, sports betting and casino games. The compulsion to gamble is challenging to overcome, but proper treatment and a support network of close friends and family can help.

As of January 1, 2020, marijuana is a legal substance in the state of Illinois. While there isn’t a compound in cannabis to make it addictive, users can form a dependency on the drug, especially if they’re using it as a way to self-medicate or cope with stressful situations.

Many misconceptions exist about marijuana and its effect on the body. Some people believe cannabis is entirely safe to smoke or consume. In reality, smoking any substance causes harm to the lungs. Marijuana contains a chemical compound called tetrahydrocannabinol (THC) that enters the bloodstream and moves to the brain. Once there, it impacts the way you think and react in situations. Extreme marijuana use can result in serious concerns, including psychosis, paranoia and hallucinations.

An estimated 30% of individuals who use cannabis have a marijuana use disorder. These individuals depend on the substance, which can result in some of the more severe effects of long-term marijuana usage if not addressed. Cannabis is also considered an entry-level drug that can introduce people to other substances that have even more dangerous effects on the body and mind.

The opioid epidemic affects the entire United States. In Illinois, nearly 80% of drug overdose deaths in 2018 involved opioids in some way. Many people become addicted to opioids after being given an official prescription by a doctor. Part of the reason so many people become addicted to opioids is that they don’t learn how to take prescription medications safely.

Opioids are addictive due to the rush of dopamine they offer. The longer someone takes a drug, the more likely they are to develop a natural tolerance. Over time, they will require a higher dose to achieve the feeling they’re seeking. Continued use also builds a chemical dependence in the body that results in a series of withdrawal symptoms when the medication is stopped.

If you or a loved one is experiencing opioid addiction, recovery is possible. Approach the topic gently and research treatment programs that offer the help you’re looking for. Supporting a loved one during their recovery is critical in a successful transition from addiction to a life free from substance use.

Hallucinogens alter the way the user interprets reality. Multiple substances are hallucinogens, and they have a high potential for abuse. While there are no chemicals in hallucinogens that make them physically addicting, some people become dependent on the out-of-body feeling caused by the drugs. Tolerance also builds with continued use.

Treatment for hallucinogen addiction relies on breaking unhealthy habits and changing the psychological reliance on substance use. Inpatient and outpatient support are available, as are multiple types of therapy. If you’re struggling, talk with a professional to determine what method is right for you so you can get on the road to recovery.

If someone is addicted to cocaine, they’ll feel an urge to use that is difficult to ignore. People tend to get addicted to cocaine due to the feelings they experience when they are coming down from a high, such as anxiety, irritability and confusion. These symptoms lead to increased usage that can turn into an addiction.

While the feelings that come with cocaine use may be pleasant at the moment, the reliance on the drug starts to affect the body, mind and personal relationships. People often feel a compulsion to use the substance, as it changes the way the brain works.

Fortunately, recovering from cocaine addiction is possible. Many professional treatment centers can equip you with the tools to manage your addiction and break free.

How to Get Help if You Are Struggling With Addiction in Swansea, Illinois

If you or someone your love is struggling with addiction, now is the ideal time to pursue treatment. Many people put off getting the care they need for various reasons, including:

Addiction also alters the brain, making it a challenge for many people to stop using substances even when they want to. 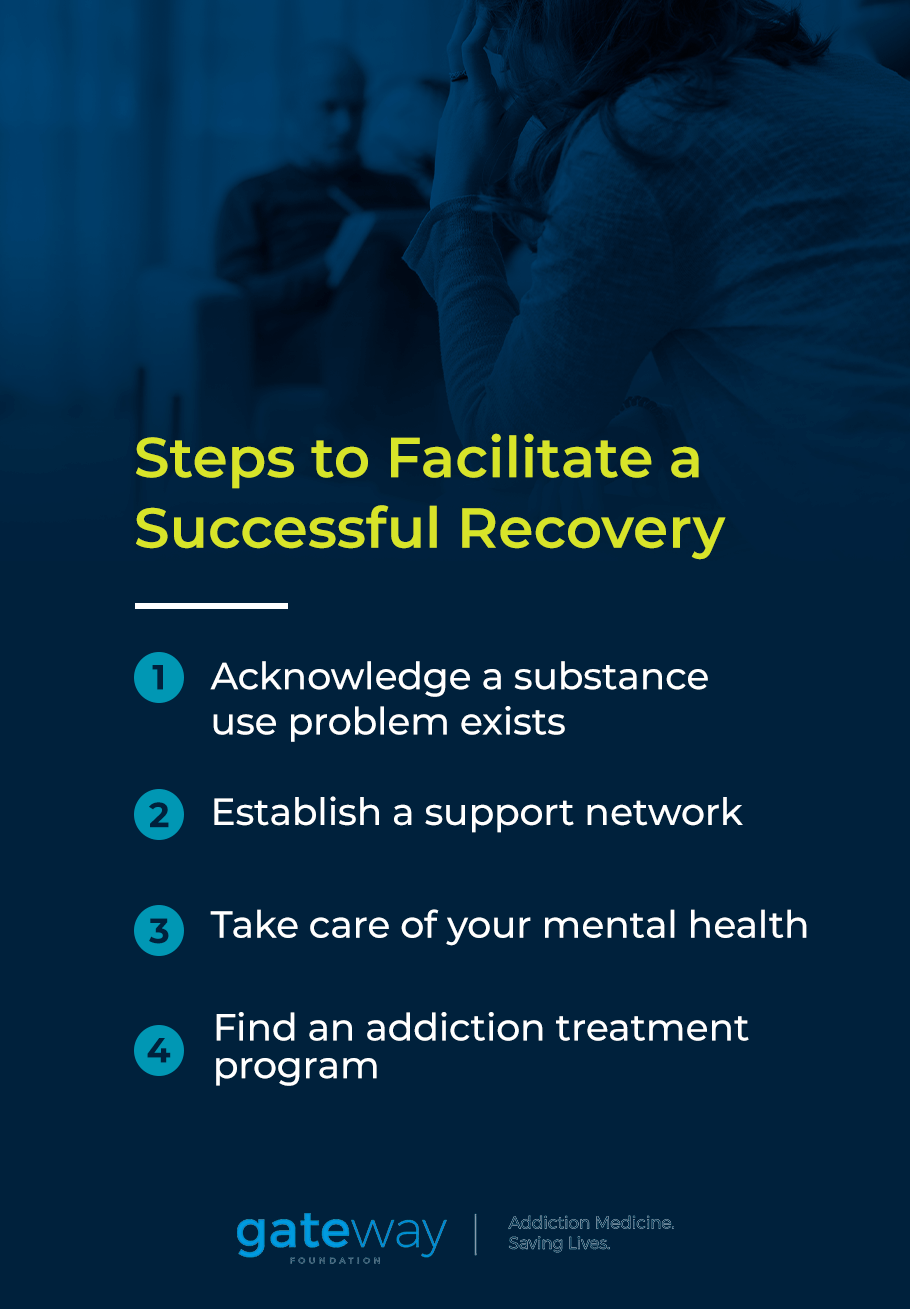 While these may seem like good reasons to avoid treatment, continuing to use a substance or trying to quit on your own can lead to more difficulty moving forward. If you’re struggling with addiction, you can take a few steps to facilitate a successful recovery:

Addiction is often hard to acknowledge, and determining whether or not you need help can be challenging. But seeking treatment is the best way to overcome your addiction and find healthy coping mechanisms for any triggers in your life. At Gateway Foundation, we treat a variety of addictions, and our caring staff will provide you with quality care to get you back on track.

When you tackle your addiction head-on, you’re taking no longer letting a substance or an impulse control you. Treatment means truly taking charge of your life. Once you take those first few steps, you can feel proud of all the progress you’ve made and plan a future where you’re free from drugs and able to find new, fulfilling hobbies to fill your schedule. You can start spending meaningful moments with your family and friends without focusing on using substances.

If you or someone you love is struggling with addiction and is looking to recover, contact Gateway Foundation for more information and assistance.