Addiction can feel like a solitary experience, but many people in the United States struggle with some kind of substance use disorder. It’s hard to see that addiction has formed until it gets to a point where it’s affecting your body, mind and relationships. Once an addiction reaches this point, treatment is the best way to recover and reclaim your life.

At Gateway Foundation, we walk you through each step of the recovery process, so you’re never alone. Once you recover, we’re right by your side to help you manage future triggers, so you can prevent a relapse. If you’re in the Jacksonville, Illinois, area, get in touch with Gateway Foundation to start the process of your healing.

While the substance varies from person to person, roughly 10% of Americans struggle with some kind of addiction. It can be challenging to acknowledge you’ve developed an addiction, but it’s important to remember you aren’t alone. Gateway Foundation has treatment centers throughout Illinois that specialize in various substance use disorders, so you or a loved one can begin the journey toward recovery.

Alcohol has become a societal norm and is constantly sensationalized in media. Our favorite celebrities advertise alcoholic products or produce their own brand, which drives people to buy and use their products. It’s become commonplace to drink alcohol with friends at restaurants or celebrations. Twenty-first birthdays are often expected to be celebrated with copious amounts of drinking in the United States.

The legality of alcohol and its availability is part of what makes it such a dangerous substance. Following federal law, Illinois prohibits the sale of alcohol to anyone under the age of 21, but young adults and teens still find ways to consume alcohol. Currently, 29% of teenagers in the U.S. drink alcohol. Drinking at a young age increases the chances of developing an alcohol use disorder. Some studies suggest having family members with an alcohol use disorder can influence the likelihood of alcohol misuse in your adult life.

Hangovers are often the only problem people worry about when they drink alcohol, but many long-term effects of alcohol consumption aren’t often discussed. The more your drink, the more your body and mind become dependent on the substance. This makes it difficult to quit because the cravings and withdrawal symptoms can be uncomfortable and, in serious cases, life-threatening when attempting a cold turkey detox on your own.

Programs exist to help you or a loved one overcome alcohol addiction and reduce withdrawal symptoms. With the right ream and support network, recovery is possible.

Cigarettes and other tobacco products are other substances that the media have popularized. Smoking is depicted as “cool” or “trendy” in movies and television. While the sensationalized tobacco image is falling out of popularity, 34 million adults in the United States still smoke. Even more people, adults and children alike, are exposed to secondhand smoke, which can harm the body.

Like alcohol, it is illegal to purchase and use tobacco until the age of 21, but young adults and teenagers are still finding ways to access these products. E-cigarettes are particularly popular among younger generations, especially since they were initially proposed to be safer than traditional tobacco. However, new evidence suggests that e-cigarettes can be just as addicting and harmful to the body.

As the body cleanses itself of nicotine and the other chemicals found in tobacco or vape products, you’ll start to feel and breathe better. Recovery from a tobacco and nicotine addiction is possible, and there are multiple treatment methods available to help you during the process.

Many states across the country are legalizing marijuana for medical and recreational use. In Illinois, marijuana was legalized for recreational use starting on January 1, 2020. Just because it’s a legal substance doesn’t prevent addiction to the substance. Many people form a dependency on the drug. The need or desire to use marijuana and the reliance on its effects keeps people hooked, particularly if it’s being used as a way to cope with stress or mental health symptoms.

There’s a common misconception that marijuana is a safe substance to use when the opposite is true. Inhaling smoke, whether from tobacco or marijuana, is bad for lung function, and a chemical compound called THC alters the brain once it enters the bloodstream.

If used excessively, long-term effects of marijuana use can result in symptoms such as paranoia, hallucinations and psychosis. As marijuana gains more popularity, more people start to use it. As a result, three out of ten people develop a marijuana use disorder and become more prone to experience the long-term side effects of extended marijuana use.

In the Lake Villa area, synthetic marijuana— also known as spice— is used as an alternative to the real thing. The symptoms of synthetic marijuana differ significantly from the natural product and, in many cases, are more severe and damaging to the body. If you or a loved one are struggling with real or synthetic marijuana use, seek treatment options to help facilitate a healthy recovery.

The use of opioids has become an epidemic in the United States, as these drugs become more widely available to the public. Improper use and a lack of knowledge about safely taking prescription medications cause some individuals to become addicted. Opioids cause approximately 80% of overdose deaths in Illinois, making it one of the more dangerous substances to develop an addiction to. 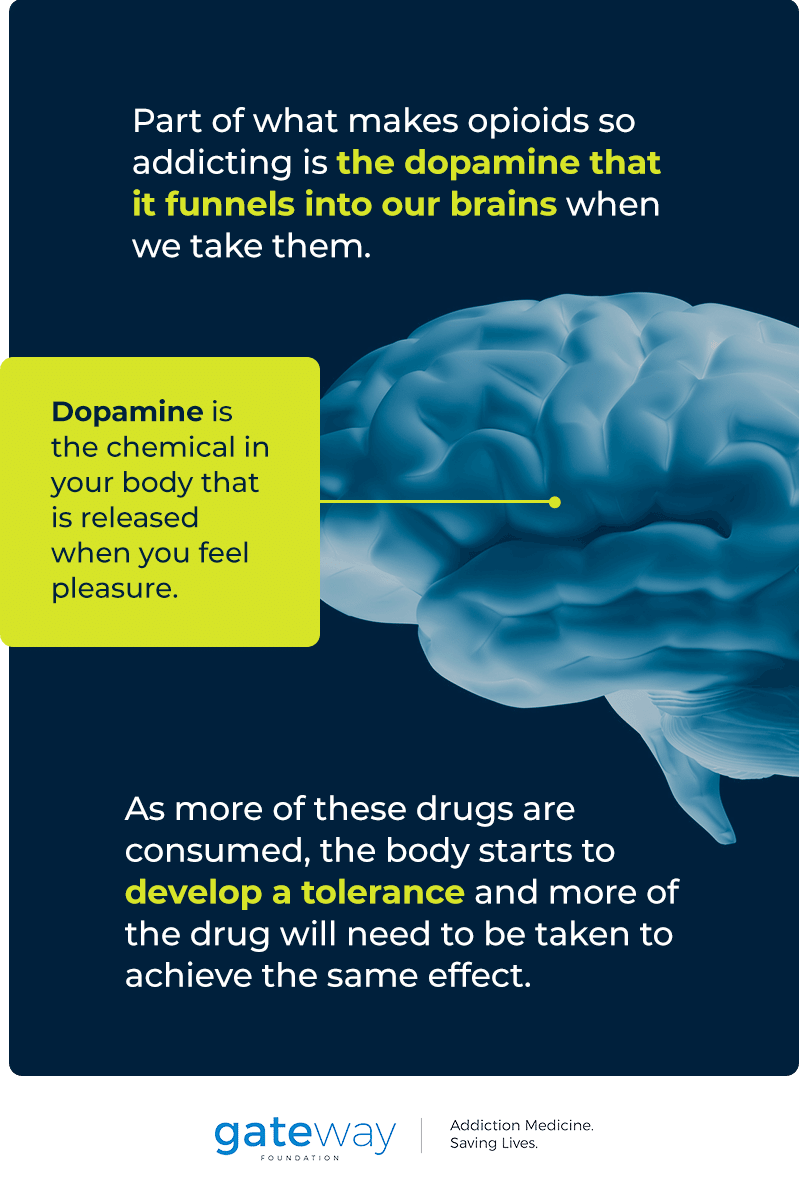 Part of what makes opioids so addicting is the dopamine that it funnels into our brains when we take them. Dopamine is the chemical in your body that is released when you feel pleasure. By taking an opioid, the body receives more of this chemical and makes you feel good. It’s part of what makes these drugs effective painkillers and so dangerous. As more of these drugs are consumed, the body starts to develop a tolerance and more of the drug will need to be taken to achieve the same effect.

Sudden cessation of opioids can result in a series of withdrawal symptoms, especially if the body has built up a physical and psychological dependence on the medication. This is often enough to convince people to continue using these drugs despite the harmful effects.

Opioid addiction can be dangerous, but treatment options and programs are available to support you or a loved one during the recovery process.

The stimulation cocaine provides draws people in to try the drug. When someone comes down from a cocaine high, they might feel agitated, anxious or confused, and these uncomfortable feelings can convince people to keep using the substance. The body will begin to build a tolerance to cocaine, and more will have to be used to achieve the same result. Increasing the amount of cocaine consumed can increase the long-term health effects associated with the drug.

Using cocaine also affects personal relationships, as the person using shifts their attention from their personal lives to drug use. The strain can drive people to use even more of the drug to cope with stress and feel relief. Acknowledging this evolution is an essential step in managing the addiction and preventing an addiction from developing even further.

It’s very possible to recover from cocaine addiction, but it is not recommended to quit the drug cold turkey at home without proper support. Relapse becomes more likely in these situations, and there is an additional health risk to be considered. If you or a loved one is struggling with a cocaine addiction, treatment programs and centers staffed with knowledgeable professionals can guide you through recovery.

As the name suggests, hallucinogens cause the user to experience hallucinations. There are three types of hallucinogens, including psychedelics, dissociatives and deliriants. Each type is associated with unique side effects and potential for addiction. When someone develops an addiction to a hallucinogen, it results from psychological dependence.

Many people who use these drugs make them part of their recreational activities and may use them before going to bars or hanging out with friends. The challenge with quitting hallucinogens is the association between the drug and fun. People fear that without it, they’ll miss out somehow. However, the physical and mental symptoms of addiction are harmful and long-lasting.

If you’re experiencing an addiction to hallucinogens, you have multiple treatment options. With the proper treatment, you can fully recover and get your life back on track.

How to Get Help If You Are Struggling With Addiction

If you or a loved one are experiencing addiction, you’re not alone. Many Americans struggle with addiction, and treatment programs exist to give you the vital support you need to get through the recovery process. Here are some steps you can take to begin the journey:

Some people choose not to seek help for reasons such as:

These reasons can be convincing enough to prevent someone from reaching out and asking for help at any given moment. However, choosing to continue using a substance harms the body, mind and relationships. If you or someone you love is struggling with addiction, consider working with a treatment facility or program to start the recovery process and access a vast support network.

You can focus on spending quality time with the most important people in your life and work toward achieving life goals once you’ve tackled your addiction. Even after your recovery, Gateway Foundation is here for you should you ever need help. Contact us for more information today and let us help you get your life back on track.