What is binge drinking? Binge drinking is the consumption of alcohol that raises a person’s blood alcohol concentration to 0.08 or above. For men, this usually takes five or more drinks in two hours, and for women, it usually takes four or more drinks. In contrast, the recommended amount of alcohol consumption for women is no more than one drink a day and no more than two for men.

What is Binge Drinking and why is it Dangerous? 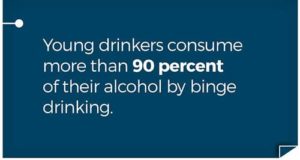 There are a lot of health risks associated with alcohol consumption, such as an increased likelihood of contracting certain cancers and difficulty with memory and learning. With excessive alcohol consumption, additional risks such as unintentional injury like blackouts, alcoholic coma, and alcohol poisoning are higher than with moderate use.

Rates of violence, including domestic and sexual abuse, also increase when drinking is involved. An estimated 50 percent of sexual assaults involve alcohol.

How Common is It?

Binge drinking typically evokes images of college students in fraternity houses and, in fact, young drinkers consume more than 90 percent of their alcohol by binge drinking.

However, they are not the only ones. One in six adults in the United States engages in binge drinking four times a month. Over 50 percent of those who binge drink are between the ages of 18 to 34. It is also most prevalent among men, as men are twice as likely as women to binge. However, in the past couple of years, studies show women have begun to close the gap in alcohol consumption.

What Should I Do if I am or Someone I know is Struggling with Binge Drinking?

Attempts to quit without professional help are mostly unsuccessful, and they can also be fatal. Seeking professional help is the safest and most reliable way to stop drinking. For help with binge drinking, give Gateway a call at 877.505.4673.

The Importance of a Recovery Community

Drug And Alcohol Use in Adolescents