Racism has been embedded in the United State’s war on drugs since its inception. The war on drugs has had little impact on drug use rates or public safety, but it has resulted in a skyrocketed prison population, especially among communities of color. The impact of the war on drugs has been mass incarceration, increased felony charges and lives disrupted by drug criminalization.

The time has come for a new approach to substance use in America. Addressing the matter as a public health concern rather than a criminal issue will do more to help those who suffer from substance use disorders. It’s vital to understand how the war on drugs began, how it has evolved over the years and the harmful effects it has had. Learn about the war on drugs and how America can heal from its impact.

The History of the War on Drugs

It was June of 1971 when President Richard Nixon declared a war on drugs, calling drugs “public enemy number one.” He implemented this war in multiple ways — he increased federal drug control agencies and pushed for mandatory sentences and no-knock warrants. He passed the Comprehensive Drug Abuse Prevention and Control Act, which put all drugs into an organized system based on addiction potential and medicinal use.

In the act he passed, Nixon put marijuana in the Schedule 1 category of controlled drugs, despite the dissent of his appointed review commission. Schedule 1 drugs are those with no medicinal uses that doctors cannot prescribe. Nixon also created the Drug Enforcement Administration (DEA) to target the production, distribution and use of illicit drugs.

In the decades that followed, the war on drugs intensified into what it has become today. After Nixon came President Jimmy Carter, who exercised minimal focus on drug policies and did little to change or expand on the war on drugs. It became a focus again in the 1980s with the Ronald Reagan administration.

When Reagan took office in 1981, he began to expand the war on drugs, increasing the number of people imprisoned for nonviolent drug offenses. His administration put significant focus on the issue of drugs, drawing a large amount of public attention.

The first lady, Nancy Reagan, spearheaded an anti-drug campaign. She made dozens of appearances across the nation and several foreign countries. In her addresses, she suggested children facing peer pressure to try drugs should “just say no,” which became the anti-drug slogan. While she may have had admirable intentions for her efforts, she helped build a culture of public fear about drugs, which prompted support for harsher policies.

In 1986, Reagan passed the Anti-Drug Abuse Act, which was the next major step in the war on drugs. It increased funding for anti-drug efforts and added to the number of drug offenses with mandatory minimum sentences. It included a focus on marijuana and crack cocaine.

The zero-tolerance policies implemented in the Reagan era led to an exponential growth in the nation’s prison population. Though the age of “just say no” is long over, drug-related imprisonment remains high. Laws criminalizing drug possession and use, with mandatory minimum sentences, have remained intact. 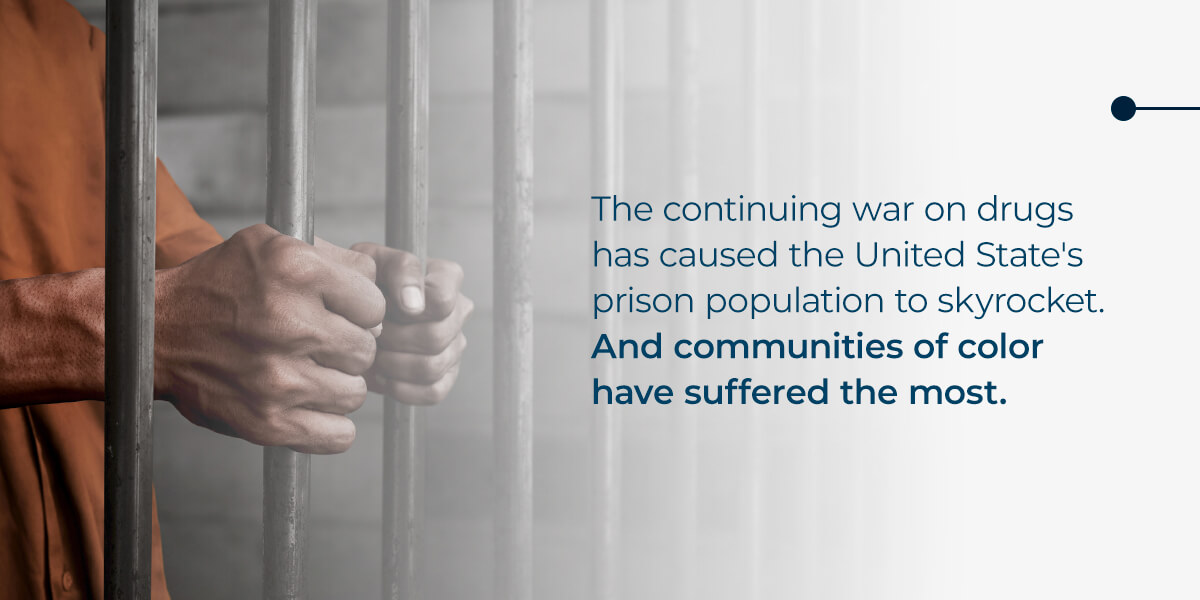 The War on Drugs Today

The United States has the highest prison population, both in absolute numbers and per capita, in the world. No other country has so many of its citizens behind bars. The nation with the next highest prison population, El Salvador, trails by almost 100 people, with 562 per 100,000 incarcerated. No other wealthy, developed nation comes close to America’s imprisonment rate. Mass incarceration has become the war on drugs’ legacy. And communities of color have suffered the most.

Racism and the War on Drugs

From the beginning, Nixon’s war on drugs had racist motivations. One of Nixon’s top aides, John Ehrlichman, admitted what the drug war was really about. He said the administration’s main enemies were the political left and the Black community. Under the guise of controlling drugs, the government could get away with attacking both “hippies” and African Americans.

The war on drugs gave the Nixon administration the opportunity to arrest, raid and vilify its strongest political opponents. Nixon’s focus on marijuana was not an accident — it’s the most commonly used substance among Black Americans, but it’s considered less dangerous than any other Schedule 1 drug. Racism was the primary reason for this categorization.

Racism in Drug Policies Throughout History

The 1970s were not the first time the United States government hid racism in illegal drug policies. Decades earlier, anti-opium laws criminalized Chinese immigrants, among whom opium use was common. These policies took root in San Francisco, where many Chinese migrants lived. The law made it illegal to smoke in opium dens. The first federal law regarding opium was the Smoking Opium Exclusion Act of 1909, which banned the importation, possession and use of opium not for medicinal purposes.

Throughout United States history, it’s been easy for policymakers to cover racism under a false concern for public drug safety. Such laws provide an excuse to search, stop, imprison, disenfranchise and otherwise discriminate against specific races or groups. A century ago, legislators used opium laws to discriminate against Chinese immigrants. In the 1970s, Nixon’s administration used public fear regarding drug safety to control his political opponents, including Black Americans. It’s vital to recognize and understand the race-based motives behind drug laws in America. 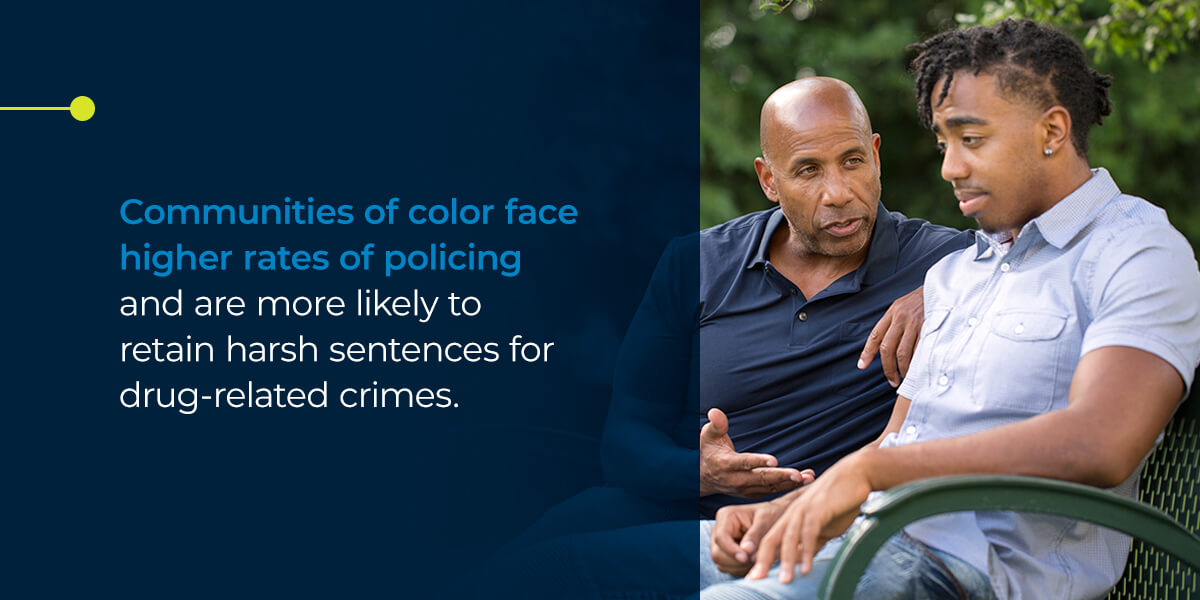 Today, Black America is still suffering social effects from the war on drugs. The vast majority of incarcerated Americans, 46%, are in jail for drug crimes. And while about 14% of the nation’s population is Black, Black people make up just over 38% of its prison population, with more dramatic proportions in certain states. One out of every three Black men born in 2001 can expect to go to prison in his lifetime.

These statistics do not indicate an increased amount of drug use among Black people — instead, it indicates law enforcement’s focus on communities of color and racial disparities in punishments. Communities of color face higher rates of policing and are more likely to retain harsh sentences for drug-related crimes.

Where Does the Racial Disparity Come From?

The fact that the war on drugs was always meant to target Black Americans is only the beginning. In some ways, racism is ingrained in the war on drug’s policies. For instance, cocaine comes in two forms, and the form that is more common in Black communities incurs much harsher minimum sentencing. Another example is marijuana — it’s the most used substance among Black Americans, and it’s listed as a Schedule 1 drug despite its medicinal use and comparatively fewer side effects than other Schedule 1 substances.

But the problem runs deeper than the text of the law. Police officers, jurors and judges across the country take part in the issue, whether or not they’re overtly racist. Implicit or unconscious bias is a major driver of higher arrest rates and harsher punishments for Black and brown drug offenders. Drug violations have also become an excuse for immigrant deportations. Racism in the war on drugs is a complex problem interwoven in the nation’s underlying racial tension.

Why It’s Not Working

The war on drugs is not working. All it has accomplished is devastating Black and brown communities. It has not made drugs less available or decreased drug use — in fact, drug use rates have stayed almost identical to what they were in 1971, when Nixon waged his war on drugs. American people continue to suffer the effects of substance use disorders.

Public health related to drug use has actually worsened since the war on drugs began. Since 1999, overdose deaths have increased by a significant amount, especially for males. The total recorded amount of overdose deaths was less than 20,000 in 1999 — by 2019, it reached 70,630. A large portion of these overdose deaths are the result of synthetic opioids like fentanyl, but deaths involving heroin, methamphetamine, cocaine and other substances have also gone up. Overdoses are more common following release from prison.

Not Helping Those With Addictions

Those who suffer from substance use disorders are no better off with these policies in place. As many as 76.9% of drug offenders go back to prison within five years of release. And the initial prison sentence is not the main obstacle to recovery. These individuals continue to pay a high price for the rest of their lives.

Because felony charges cost citizens their right to vote in various states, many drug offenders lose their political representation. In addition, having to disclose a felony or period of incarceration leads to employment and housing discrimination. Even after they’re released from prison, drug offenders continue to suffer.

The war on drugs was never meant to help those who struggled with substance use disorders, and it hasn’t. It’s well past time to implement a compassionate, helpful approach instead. Criminalizing drug use does not solve the issue or help keep people safe. Changed policies could help those who are struggling to access the care they need, offering necessary help rather than punishment. 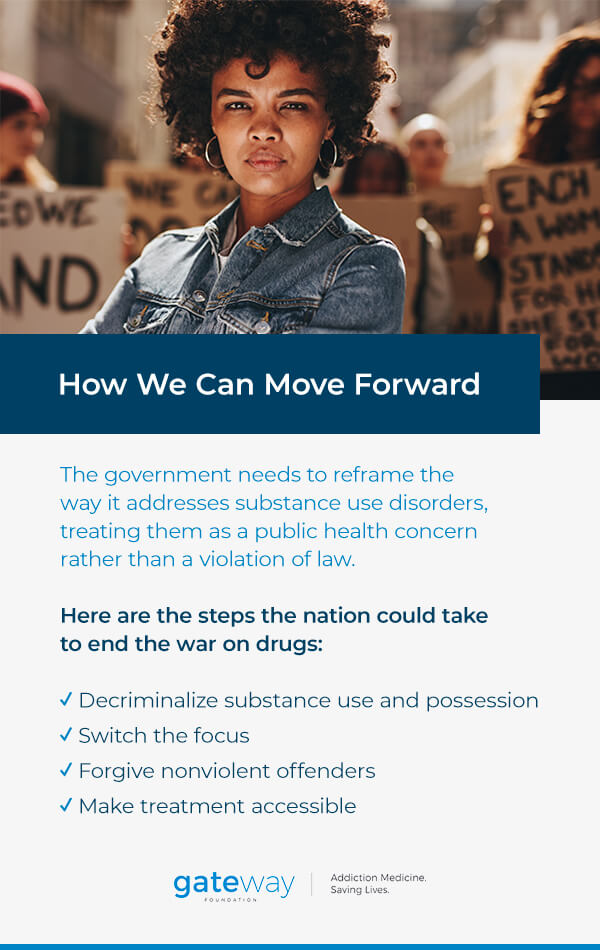 How We Can Move Forward

Current drug laws are not working. A recovery- and treatment-based approach is the best way to handle drug use. The government needs to reframe the way it addresses substance use disorders, treating them as a public health concern rather than a violation of law. Here are the steps the nation could take to end the war on drugs:

A Case Study: Tobacco Use in the United States

If you’re concerned about what decriminalizing drugs will mean, it’s helpful to take a look at the effects these policies have already had. First, consider tobacco use rates in America.

Tobacco is not a scheduled substance. The government has focused on spreading awareness of the harm tobacco can cause. Health teachers in schools urge children not to try tobacco, and doctors provide assistance to those who want to quit. Framing tobacco use as a public health issue instead of criminalizing the substance has made a huge difference. Cigarette smoking has hit an all-time low in the United States.

A Case Study: Heroin Use in Portugal

Another example is Portugal, where policies mirrored the United State’s war on drugs from 1980 to 2000. By the end of the 20th century, widespread heroin addictions devastated the nation. In 2001, Portugal decriminalized drug use, shifted control to the ministry of health and expanded its welfare system. Since these changes, the country has seen a sharp decline in heroin use, along with related deaths and diseases.

These examples show how addressing drug use as a public health concern, rather than a criminal offense, has a more powerful impact. This approach helps those with substance use disorders recover without fear of imprisonment and drives drug use rates down. 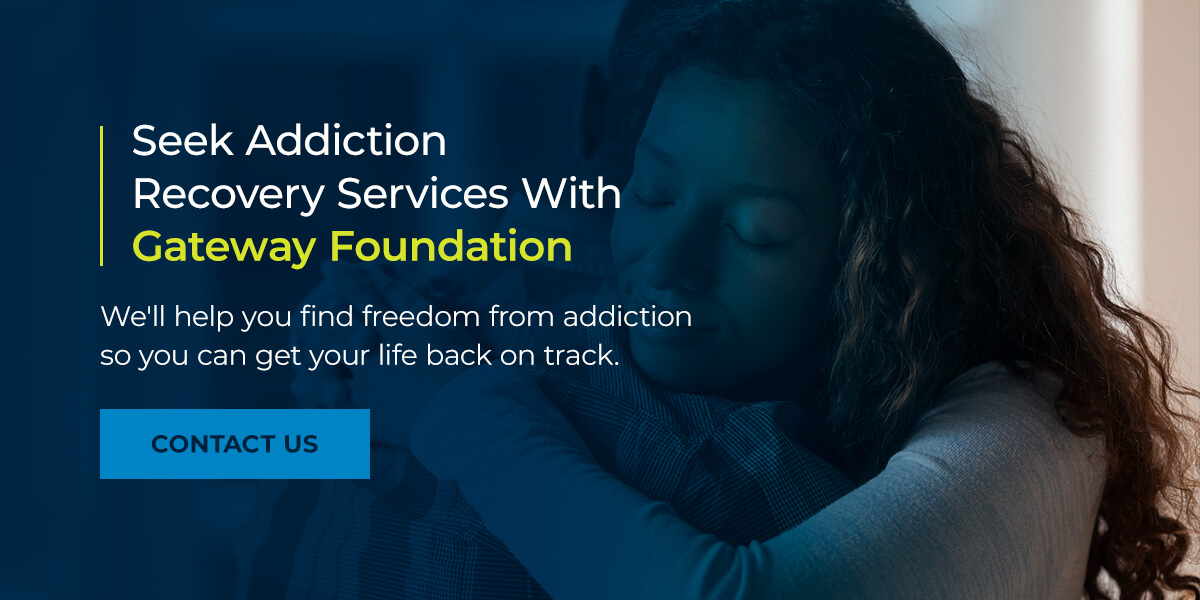 The war on drugs has lasted over half a century. In that time, it has disproportionately affected communities of color, devastating families and tearing lives apart. It has done nothing to reduce rates of drug use and has coincided with increased overdose deaths. It’s time to approach drugs through the lens of public health, giving those with substance use disorders the help they need. This means decriminalizing drug use, spreading awareness and broadening access to care.

If you or someone you know is suffering from a substance use disorder, consider reaching out to us at Gateway Foundation. We provide compassionate, professional, effective care. We’ll help you find freedom from addiction so you can get your life back on track. If you’re seeking addiction recovery services, contact us today.

Drug Addiction in the Age of the Internet

Guide for Clergy Experiencing Substance Use