Drinking began for Mike when he was working at a liquor store at age 13. His friend’s father owned a store, and Mike was responsible for stocking the shelves and checking inventory. It was easy to steal a bottle here and there because he was the one in charge. As the years passed, Mike began experimenting with inhalants; as the highs became less intense, he moved on to different substances with greater risks. One such drug was Belladonna, a substance used for treating asthma. Its serious side effects caused him to overdose, and Mike awoke three days later in a mental institution. But his using didn’t stop there. 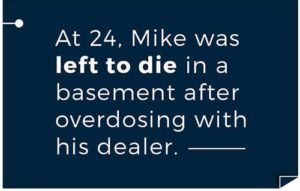 Mike continued down this path, using LSD and speed to reach the high he had been seeking. Still able to graduate from high school and hold down a job as a taxi driver, Mike became a “garbage can,” using intravenous drugs and whatever else he could find that didn’t leave him with a hangover.

Things only got worse. At 24, Mike was left to die in a basement after overdosing with his dealer. At that time, Mike’s father had had a stroke and was in a coma. His wife at the time told him that this was the breaking point; their marriage was over.

How Mike Got Help

Realizing he needed help and knowing his brother had been receiving addiction treatment at Gateway, he decided it was time. Mike was in a residential addiction treatment center for a short period of time, but after his release, he was involved in an armed robbery and attempted murder. Unfortunately, his addiction and search for the next high continued. After spending six weeks in county jail, Mike came into contact with a corrections officer who referred him to Gateway again. Mike entered treatment at Gateway Lake Villa. After 13 months, Mike became a model patient. Protected from the outside world and working with dedicated staff, it became evident to Mike that recovery was possible. After completing the Lake Villa program, Mike moved to Gateway’s recovery home in Chicago.

After four decades in recovery, Mike has stayed in contact with those he met at Gateway and feels they have positively influenced his recovery.

“They have the ability to rid you of the image you had of yourself,” he says, “and teach you that you can live life without drugs, no matter where you come from.”

Use Mikes Success Story as Inspiration to Get Addiction Help