May marks Mental Health Awareness Month, a time dedicated to raising awareness and reducing stigma. To start our month-long conversation about mental health, we started asking some questions:

According to recent studies, adults between the ages of 18 to 25 make up the highest percentage of people struggling with mental illness, but compared to other age groups, they also report the lowest rates of seeking treatment.

One of the main hurdles preventing people from seeking necessary treatment is the stigma surrounding mental health. Many people feel their mental health is not as important as their physical health or feel ashamed or embarrassed to admit they have a mental problem. As a result, some ignore their mental health concerns while others try to treat their symptoms by themselves.

What are some signs of a mental health disorder? 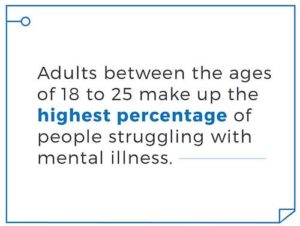 The signs of each mental health disorder are unique to that disorder, but here are a few to look out for:

What are some examples of mental health disorders?

How can we reduce stigma?

In the past few years, there has been a change in the conversation around mental health. Mental illnesses, such as bipolar disorder, have garnered more attention due to more celebrities, such as Mariah Carey, sharing their battles. If we continue asking questions and normalizing conversations about mental illness, then we can continue investing in and improving treatment for mental health.

To learn more about mental health awareness month and receive help with mental health-related issues, give Gateway a call at 877.505.4673.

What is Transitional Housing?