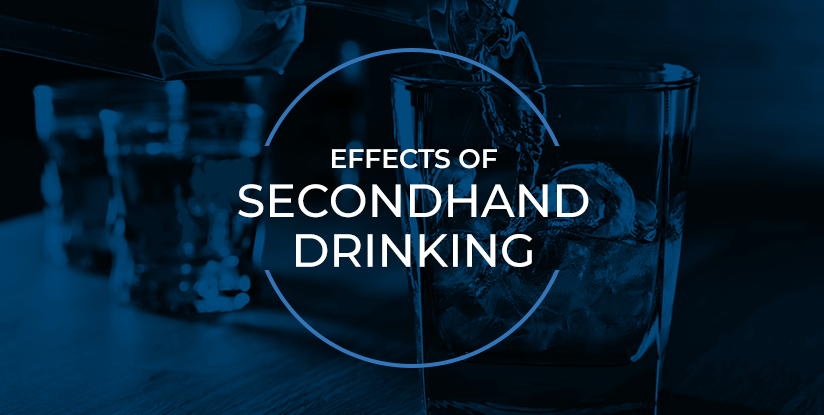 Many alcoholics do not realize the impact their addiction has on the people around them. Through secondhand drinking, alcohol addiction affects friends, spouses and children, causing family problems and damaging relationships.

Secondhand drinking refers to how a person’s alcohol abuse and behavior negatively impact other people. In the United States, about one in five adults have reported experiencing harm due to another person’s behavior as a result of alcoholism.

Approximately 21% of women and 23% of men have experienced some form of secondhand injury as a direct result of alcohol abuse.

In total, the effects of secondhand drinking hurt more than 53 million people every year. That number may also be much higher than it appears because study participants were only asked about the last year of their lives. If you’re struggling with alcohol addiction, you might not even realize the people around you are hurting too.

Here are the seven most common effects of secondhand drinking.

Ethyl alcohol chemicals can alter the brain of those who consume excess amounts of alcohol. This can cause alcoholics to mistreat and sometimes harass others. Harassment can occur in the home, workplace or other environments where alcohol is involved.Women are more likely to experience harassment from someone who abuses alcohol than men are. Women are also more likely to report that the harm caused by the secondhand effects of alcohol is related to a spouse. Men, on the other hand, are more disposed to experiencing problems related to secondhand drinking caused by a stranger.

According to a study from the Johns Hopkins Bloomberg School of Public Health, alcohol abuse can increase the probability of violent crime. Between 2002 and 2008, 21 percent of people convicted of violent crime reported being under the influence of alcohol.

Secondhand drinking increases the probability of death or injury due to a car accident. Family members in a vehicle with a drunk driver are at an increased risk. Alcohol causes blurred vision, limited depth perception and reduces muscle coordination and brain functioning. Drinking alcohol decreases your ability to react quickly and efficiently to whatever is happening on the road. In 2017 alone, almost 11,000 people were killed in alcohol-related accidents.

Many family and marital issues stem from alcohol abuse. Couples in which one partner has an alcohol addiction experience significantly more negative interactions compared to couples who do not drink. According to related studies, 55% of domestic partner violence occurs after drinking.  Alcohol abuse can lead to many behaviors that put strain on a marriage, including legal problems, inability to contribute financially and neglect.

Alcoholism can induce financial hardship for families in which one or more people abuse alcohol. The cost of increased alcohol use can put families into financial crisis, including debt. An alcoholic is likely to neglect financial responsibilities like bills and car payments in favor of buying alcohol.

Property damage is one side effect of secondhand drinking that men tend to report. Alcohol reduces your inhibitions and impairs your judgment, which can lead to poor decision making. This state of impaired judgment, in turn, can lead to property damage. Someone makes a split-second decision to act violently and takes their anger and frustration out on the nearest inanimate object.

Impaired judgment due to alcoholism and secondhand drinking doesn’t just result in direct property damage like broken windows and slashed tires. It can also contribute to vandalism. While this is also a form of property damage, it is classified separately by the law and can result in severe charges if law enforcement catches you in the act.

The Cycle of Alcoholism: Secondhand Drinking and Addiction Development

Secondhand drinking doesn’t just affect those in your immediate family or social circle. It can negatively impact your future and the futures of those around you. Women who are abused by alcoholics, either as children or adults, are 15 times more likely to abuse alcohol themselves. It’s also estimated that roughly 50% of children raised by alcoholics will develop their own alcohol addiction at some point in their lives.

The behavior you display while you’re drinking has further-reaching consequences than you may realize at the time.

How Gateway Can Help