Despite the harmful and long-lasting effects of drug use, people struggling with drug addiction have a compulsive and uncontrollable urge to keep using. Stopping can be difficult. In fact, it may even seem impossible, especially because drug withdrawal symptoms can be extremely unpleasant, dangerous, and even lethal. However, with the right drug withdrawal treatment, people can overcome withdrawal and end their drug use.

If you or a loved one is suffering from a drug use disorder, Gateway can provide a safe place to manage the effects of drug withdrawal and help you take the first steps on the road to recovery. Personalized addiction treatment programs are available to help individuals live a drug-free life.

A drug use disorder affects a person’s brain and behavior. It often leads to the inability to control the use of the substance. Continued use interferes with the brain’s motivation and reward center, leading the user to crave and depend on the drug. When the drug is abruptly stopped, withdrawal symptoms will start.

Drug withdrawal symptoms can vary greatly and depend on several factors. These factors include:

Drug Withdrawal Symptoms Vary Based on the Substance 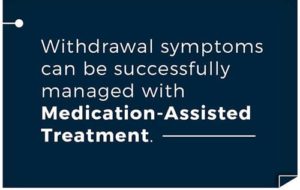 People who consume large amounts of a drug—especially opioids—for long periods of time are at risk for longer-lasting drug withdrawal symptoms. Experts identify this as Post-Acute Withdrawal Syndrome (PAWS). According to Psychology Today, PAWS results from “significant changes to brain anatomy and chemistry.” It can occur even after the substance is no longer in a person’s system. Symptoms can include memory problems, sleep disturbances, sensitivity to stress, and emotional problems. They can come in waves, vary in intensity and duration, and often persist between six and 24 months.

What is the Most Effective Drug Withdrawal Treatment?

While drug withdrawal symptoms can be painful and scary, Medication-Assisted Treatment can be an effective drug withdrawal treatment solution. Gateway offers MAT as part of our numerous substance abuse treatment programs in Illinois to help manage symptoms and cravings in a professional environment. For more, contact Gateway now at 877.505.4673.

Gateway is Accredited by The Joint Commission