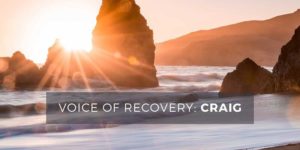 The trouble didn’t come all at once. Craig had a family he loved and a job he cared about. From the outside, life seemed pretty good. But too often, it didn’t feel that way to Craig. In his mind, he was stagnant. This is Craig’s alcohol success story.

He drank, and although he considered his drinking recreational, he would occasionally embarrass himself or upset others while intoxicated. Expecting a change to shake him from his doldrums, Craig accepted a company transfer and moved his family to another state. “It didn’t solve anything,” he says.

When His Life Became Unmanageable

Craig’s drinking escalated over time. After a few family run-ins, he swore off alcohol for a while and even looked up an old friend in the area who agreed to go with him to Alcoholics Anonymous meetings. When the situation only worsened, Craig’s solution was to get out of town and move back to the Midwest. But he only continued to struggle. 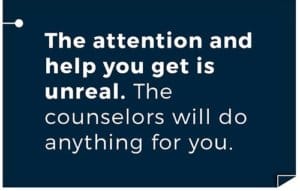 “Between work and home, it was like a ‘What else is there?’ kind of thing,” Craig says. “I was extremely depressed, drinking at work during the day. Things were not good.”

After years of unease about his alcohol abuse and guilt over escalating consequences, Craig rose one morning and admitted to himself the depth of his struggles.

With the assistance of his therapist, Craig began exploring his addiction treatment program options. After connecting with a supportive call center counselor, he chose Gateway. Then, one day before his scheduled check-in date, he was let go from his job. The blow barely registered.

“I was devastated, but I was so miserable there.” Craig says. “I went to Gateway, finally, with the gift of desperation. I went to Gateway with the firm belief that I knew nothing of how to fix whatever was wrong.”

Craig finally found the support he needed at Gateway. In addition to group therapy and other addiction therapy services that gave him the tools to begin coping with triggers that led him to drink, he participated in art therapy class and meditation practices that, he admits, didn’t initially click. But Gateway’s personalized treatment approach gave him the freedom to choose therapies and strategies that did work and enabled him to take ownership of the recovery process.

“It was a great reset button,” he says. “Along with realizing that nothing I had tried before got any results, I just did my best to follow every suggestion. If you show just an inkling that you realize you’re not there by mistake – mandated or not – the attention and help you get is unreal. The counselors will do anything for you.”

Craig began to open up during his stay at Gateway, where he developed a friendship with a fellow patient who had been through treatment in the past. When the friend took Craig to a meeting with his home group, he was floored by what he saw: three hundred recovering users, each with individual stories that now began to resonate with Craig. It became his home group too.

“I was isolated, drunk and hiding,” Craig says. “I didn’t have any friends; now I have a phone full of them.”

Today, Craig’s life is still imperfect. He split with his wife and has been struggling to re-enter his old line of work. But at Gateway, he discovered coping mechanisms that allow him to counter the inevitable stressors that life brings. His relationship with his ex-wife is warm again and, he says, they are a better team as parents living apart. His relationship with his daughters, which he calls “the best thing in (his) life,” has flourished.

“The adventures I have with them are amazing,” Craig says.

Since the day he checked into Gateway, Craig has remained sober. Inspired to reach others by telling his own story, he has helped re-launch a residential alumni program. Craig now helps carry the message of hope and renewal to current Gateway residents, confident that others can experience the “awakening” that guided him to his new life.

“I certainly have bad days,” he says, “but nothing like the hell I was in.”

Returning from such a dark place, Craig knows now, is a road that never ends. That’s the advice he wants to pass on to others in recovery. He credits Gateway with helping him learn the value of constant growth and self-discovery.

“It’s a good thing if you think you’re never going to reach the end,” Craig says. “It’s the journey, not the destination. You can’t check it off. Renewal is constant – otherwise, it isn’t going to stick.”

If you’re struggling with alcohol addiction, it’s not too late to begin your own alcohol success story. Contact Gateway today at 877.505.4673.