Chief Medical Officer at Gateway Dr. Roueen Rafeyan explains the dangers of alcohol consumption and the effects of alcohol on the brain.

The effects of alcohol on the brain, in both the short- and long-term, are profound. As a solvent, alcohol passes to the brain very quickly and can cause damage to living cells.

The chemical and physical changes alcohol makes to the brain make it especially difficult to quit drinking alcohol, from a single drink or continued use of alcohol. These changes fall into two categories: acute and chronic.

Acute changes occur when a person is under the influence of alcohol, even a single drink. Alcohol affects three of the brain’s chemical processes: glutamate, GABA and dopamine. 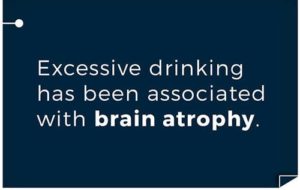 With the continued use of alcohol, chronic changes can develop over time.  Experts associate excessive drinking with brain atrophy. Alcohol withdrawal can be associated with Wernicke’s encephalopathy, also known as Wernicke’s disease. Its first signs are confusion, difficulty with gait and eye movements. If left untreated or if a person continues drinking alcohol, Wernicke’s can develop into Korsakoff’s syndrome, an irreversible disease in which people have memory loss and the lost memories are filled with confabulations, or fabricated experiences.

Alcohol consumption results in an imbalance between glutamate and GABA. Upon abrupt discontinuation of alcohol, the brain does not have enough GABA to slow down on its own. Increase glutamatergic activity results in shakes, increased blood pressure, increased pulse rate and potential for seizures. If left untreated, the condition can progress to delirium tremens, or DT.

Alcohol withdrawal can be deadly.

Conversely, the overstimulation of dopamine can lead to a slow-down in the brain’s production of dopamine. Unless a person achieves the desired effect by drinking more alcohol or another pleasure-inducing activity, they will experience dysphoria, a general emotional state marked by anxiety, depression, and restlessness.

More than half of Americans older than the age of 12 use alcohol regularly. Very few of these users are aware of the toll that regular consumption can take or the effects of alcohol on the brain and body. Alcohol interacts chemically with the brain, which can impact a person’s behavior. This phenomenon, in turn, can have long-term implications for their health.

Occasional or moderate drinkers may experience decreased decision-making skills, blackouts and memory impairment. They may also showcase recklessness and a lack of inhibitions that they might not otherwise demonstrate when sober. The side effects that heavy drinkers endure are often more dramatic, ranging from memory loss and confusion to problems with attention span and mobility.

Heavy drinkers may even lose their ability to think in any complex or abstract way. Studies have found that heavy drinking — especially in college students — is associated with a loss of gray matter in the brain.

What Influences Alcohol Effects on the Brain?

Numerous variables influence the impact of alcohol on the brain. The most significant factors include how much and how often the individual drinks. Other things like their overall health, genetic background, age and gender can all play a role in how they react to this substance.

A family history of alcoholism may also affect the impact of alcohol on the individual’s brain, making them more vulnerable to becoming addicted to a specific substance. The amount of time they’ve been drinking and the age they had their first drink also play significant roles in alcohol’s long-term effects on the brain.

The brain is an incredibly resilient organ and can form new cells through a process called neurogenesis. This process creates new neurons in the individual’s gray matter. It normally occurs during gestation, but in some parts of the brain, it continues well into adulthood and throughout our lives. It is also what allows the brain to generate new pathways to enable patients to regain skills they’ve lost after a traumatic brain injury.

Research suggests that new cell development can happen as early as 48 hours after individuals begin abstaining from alcohol. This occurrence shows that it’s not too late to stave off the worst effects of alcoholism on the brain.

Alcohol addiction effects won’t go away on their own. Similarly, alcohol withdrawal and recovery is not something you should attempt alone. It can be dangerous or even deadly, which is why it’s essential to reach out to professionals for help.

In order for individuals to begin overcoming the effects of alcohol on the brain, they need evidence-based addiction treatment programs. With several drug and alcohol rehab center locations in Illinois, Gateway can help you or someone you love take the first steps toward sobriety. Contact us today at 877.505.4673 to learn more about our substance abuse treatment programs.

Gateway is Accredited by The Joint Commission