A Conversation About Being Sober and Becoming Happy With John MacDougall 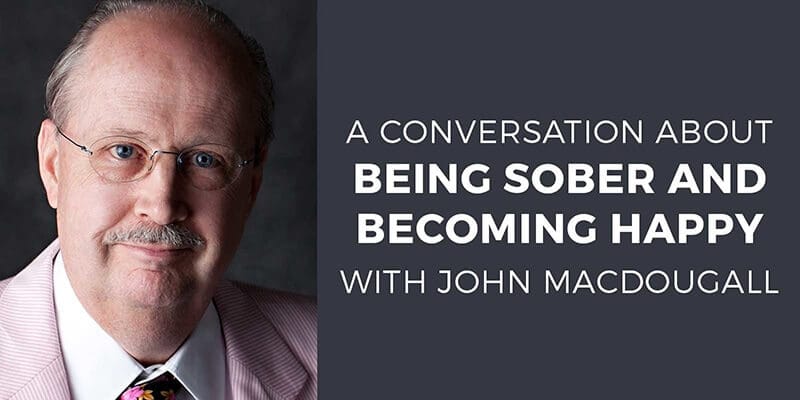 Dr. John MacDougall spent 30 years drinking alcohol and using drugs every hour of the day before being sober became a reality in 1989. He worked at Hazelden Betty Ford Foundation for two decades as the director of spiritual guidance and now works as the spiritual care coordinator at The Retreat, a treatment center grounded in the 12-Step principles. He will present on June 23 in Northbrook and June 24 in Aurora based on his lectures and book, “Being Sober and Becoming Happy.” Gateway spoke with MacDougall about the lessons he’s learned through a life and career in recovery.

What is the “spiritual condition” for people recovering with substance use disorder?

Before you began being sober, what was your relationship like with the “spiritual condition”?

My attitude was I’m the center of the universe and you exist only to the extent that you can help me get what I want.

What clicked for you, so to speak, when you you started being sober, or what worked for you to strike a balanced “spiritual condition”?

I thought I was just a heavy drinker and used a lot of drugs and that I wasn’t an alcoholic because I had a job, an address, a wife, a car—what I now call “scavenger hunt recovery.” When I finally figured out I was an alcoholic and a drug addict, I carefully detoxed myself over a six-week period, I went to AA (Alcoholics Anonymous), and I asked this guy to sponsor me. He said to me, Here’s “The Big Book.” He opened it and basically said, Here’s chapter five: it’s how it works. Here’s chapter six: it’s it in action. The 12 Steps are contained in these two chapters. If you read these 12 Steps and you do what they say, you will never drink or use again. And at that point, I had been drinking and using drugs every single hour of the day for 30 years in a row. I read them and never drank or used again. So I did a very literal application of “The Big Book.” The things it says to do are really spiritual in nature: honesty, hope, faith, courage.

What made you wake up one morning and say, I need to write my own guide?

If someone could only hear one lesson from your book and from your lectures, maybe someone who is initially struggling with their sobriety, which lesson would you tell them?

I see guys relapse at my meeting after 10, 15 years, not because they’re not working the steps, but because they’ve been working them and every aspect of their life has gotten better—marriage, job, home, finances. They look at the fact that their life got better and they go, So I’m better.

Because this is a brain disease, our brain resets every night to alcoholic. So I need to take the first three steps of AA in the first minute of my day. My simplified version is this:

Step 3: I need a fresh decision today to turn my world and my life care to God. And then carry step three all through the day.

MacDougall will speak from 9 a.m. – 3 p.m. June 23 at Techny Towers Conference and Retreat Center in Northbrook and on June 24 at Prisco Community Center in Aurora. If you or a loved one has questions about any of the substance abuse treatment programs we offer, contact Gateway today at 877.505.4673 and take the first steps to being sober.

Why Don’t I Feel Happy After Quitting Substance Use? How Drugs Hijack the Brain
July 21, 2021