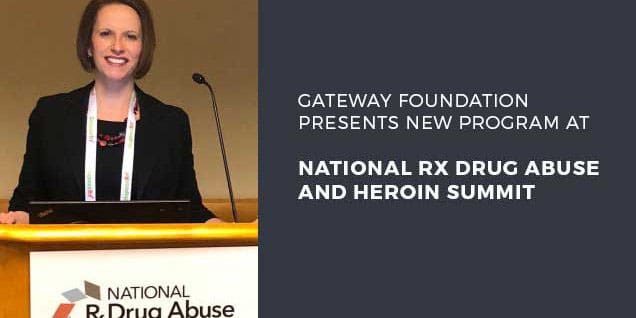 The National Rx Drug Abuse and Heroin Summit took place in Atlanta this week, and two of Gateway’s own attended to speak about a new program on Thursday. Also in attendance were special speakers President Bill Clinton, Counselor to the President Kellyanne Conway, and U.S. Surgeon General Dr. Jerome Adams.

Karen Wolownik-Albert, Gateway Lake Villa and Gurnee executive director, and Sally Thoren, Gateway Chicago Independence, Chicago River North and Chicago Kedzie executive director, presented on Project Warm Hand-Off, a new Gateway Program. This federally funded initiative targets those struggling with opioid use and works to remove barriers to treatment. Using the Screening Brief Intervention and Referral to Treatment (SBIRT) model, this program aims to connect people struggling with opioid use disorders to treatment directly from emergency departments. Recovery coaches follow up with patients to ensure the Warm Hand-Off is completed, and also with patients who initially declined assistance. “We call it ‘intercepting’ those in crisis and shepherding them to care,” Thoren says.

“We were thrilled to find our room full of interested attendees,” Thoren says. “We found that the challenges we faced in implementation have been experienced by most others as well, including delays in hospitals agreeing to partner, capacity issues, and challenges with the Medicaid changes.”

“They have obtained the waiver that allows for more services to be paid by Medicaid, so they don’t have the capacity challenges we face in Illinois,” she elaborates. “They have robust needle exchange programs, embracing a harm-reduction approach. They have outstanding data demonstrating their effectiveness.”

Dr. Adams’ presentation garnered most of the national attention: He issued the first surgeon general national public health advisory in 13 years, urging more Americans to carry naloxone, an antidote that blocks the effects of opioids and reverses overdoses.

“We fully support the surgeon general’s advisory,” Wolownik-Albert says. “At Gateway, we have been working for several years to increase naloxone access and provide education to clients, alumni, and family. Our goal is to ensure that everyone in need of naloxone has access to this life-saving medication. We train all of our staff on overdose prevention and administering naloxone.”

“In northern Illinois, we are very fortunate in comparison to other areas of the country, to have many programs and collaborations to combat the Opioid Epidemic,” Wolownik-Albert says.

Dr. Adams stated that more access to naloxone alone will not solve this crisis – access to evidence-based treatment also must be expanded.

“The ‘tone’ was one of action, not a ‘call to action,’” Thoren says. “That is, since there is universal agreement that this crisis is real, the need is great, the tone was ‘we are doing’ as opposed to ‘we must do.’”

Reach Out to Gateway Today

With several addiction rehab centers in Illinois and beyond, Gateway has the resources to help you or someone you love get sober. Contact us today at 877.505.4673.